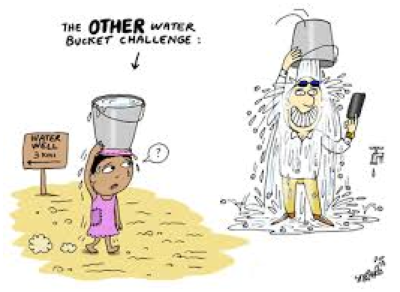 The ‘ice bucket challenge’ has taken the world by storm. Pictures of celebrities dousing themselves with buckets of ice water are widely circulated on social media with fans and observing crowds spurring them on almost hysterically. South Africans have increasingly participated in this challenge with health24 reporting on prominent personalities such as John Maytham of 567 CapeTalk, golfing icon Gary Player, Joost van der Westhuizen and the Expresso Morning Show presenter Katlego Maboe joining in the ‘icy madness’.

The ice bucket challenge is an awareness raising initiative used by the ALS Association, which is working to fight Amyotrophic Lateral Sclerosis (ALS), also known as Lou Gehrig’s disease or Motor Neurone Disease. It is estimated that ALS is responsible for 2 deaths per 100 000 people per year. The challenge is to film yourself getting doused with a bucket of ice water, post the video to social media and then nominate your friends to do the same. Should you choose not to take the icy shower, you are asked to donate to an ALS charity of your choice. As of Wednesday, August 27, The ALS Association has received $94.3 million in donations compared to $2.7 million during the same time period last year (July 29 to August 27). These donations have come from existing donors and 2.1 million new donors (http://www.alsa.org/news/media/).

Not owning a television or Facebook account I only became aware of the ‘ice bucket challenge’ less than a week ago when a LinkedIn connection shared a thought provoking picture which juxtaposed it with the lack of access to clean water experienced by countless people internationally.

“The picture disturbed me”
The picture disturbed me. I tried to bracket myself by looking at the ice bucket challenge in the context of its purpose and the existing awareness vacuum on Motor Neurone Disease which it is most definitely speaking to. Furthermore, Joost van der Westhuizen remains my all-time rugby hero and the reality of his struggle with the disease surely paints a bleak picture of its crippling effect. I pondered….Is the ice bucket challenge addressing an important issue? Definitely…Is it raising much needed funds for an insidious disease associated with significant cost implications for medical care, equipment and home health caregiving? Most definitely. Is the ice bucket challenge and the concomitant hype disproportionate to other water and health related issue? Hmmm, O yes it is!

The ‘OTHER water bucket challenge’ picture stirred an indignation inside of me which relates to the larger inequality narrative. I couldn’t escape the thought of countless women and children being raped on their oft treacherous ‘journey’ to the water well. I was vividly reminded of at least one such case I dealt with as investigator in the South African Police Service. Statistics provided by Water.Org (http://water.org/water-crisis/water-facts/water/) reflects the following sobering facts:

These statistics surely spells out INEQUALITY between the have’s and have not’s. A recent New York Times article by Nicholas Kristof gives credence to the importance of the inequality debate which deserves more attention. It highlighted that the net worth of the average black household in the United States is $6 314, compared with $110 500 for the average white household, according to 2011 census data. The gap has worsened in the last decade, and the United States now has a greater wealth gap by race than South Africa did during apartheid. Whites in America on average own almost 18 times as much as blacks; in South Africa in 1970, the ratio was about 15 times.

The inequality issue is something that should move up our priority list, especially amongst those of us privileged to earn an income and have our most basic needs (water, shelter, nutrition) met. It is something that cannot be ignored and perpetuates a multitude of social ills which we so often try to address with a one-dimensional lens. By ‘cutting up’ these issues into more manageable parts we fail to realise the interconnectedness between all the issues underpinning inequality and the fact that each one of us is part of the bigger whole.

Debate about inequalities long overdue
Notwithstanding the wide ranging criticism levelled against the ice bucket challenge, one thing is certain: The ALS Association is not passive about Motor Neurone Disease and made great strides to raise much needed awareness. A comprehensive debate about the inequalities in our midst is, however, something long overdue. Like a nameless and obese elephant in a small room it should be named and invited to the dinner table. Any notion of diluting the inequality debate, especially in South Africa, should be contested. Are whites invited? Most definitely. Churches? Guests of honour! Anybody and everybody? Free entrance!

“Silence in the face of evil is itself evil: God will not hold us guiltless. Not to speak is to speak. Not to act is to act.” — Dietrich Bonhoeffer