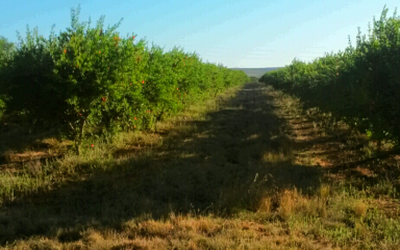 The miraculous is one of the ways our Almighty Creator reveals Himself to us.

Recently, I heard of a farmer near Somerset East whose pomegranate crop had been destroyed by black frost, which not only wiped out the fruit crop, but two-thirds of his 30 000 trees.

However, after prayer and intercession the dead and severely damaged pomegranate trees were miraculously revitalised and restored to life.

This was a testimony that I desperately wanted to hear as a revelation of the power and grace of God.

First, I spoke with Shelly Schoeman of Port Elizabeth, who led the prayers for the healing of the pomegranate orchard and had anointed the trees.

Shelley says that YHVH has blessed her with Healing Grace Ministries SA through which she is Holy-Spirit-led to heal the broken and equip them to stand in the authority of the Holy Spirit inside of them.

“I do regular counselling for whomever The Father sends to me. The counselling is purely Holy Spirit guided, I do nothing from my own perspective or knowledge,” says Shelley.

Hospitalised
Shelley explains her involvement in the healing of Al Spaeth’s pomegranate orchard: “About 36 month ago, Al, who is a very close friend of my husband, Ruben, fell ill and was hospitalised where he contracted the superbug that has been plaguing hospitals country wide”.

“Around the same time that Al was fighting this superbug, his 38-hectare pomegranate orchard was attacked by a fungus that afflicted the root systems and threatened to kill all the trees.

“The fungus was, seemingly, as highly contagious and resistant to orthodox treatment as the superbug that had infected Al.

“Both the disease and superbug were proving to be resistant to all medication and insecticides.

“Al’s life was hanging in the balance despite all the prayer.

“However, after interceding for Al and the trees, the Lord revealed to me the power of the way in which Israel overcame Jericho (Joshua 6).

“I felt that I needed to be obedient to the order that The Lord had given Joshua with regards to defeating Jericho.

Prayer strategy
“I was to form a team of prayer warriors to march each morning for seven days, and on the last day to shout a song of thanksgiving and praise and the battle for Al’s life and the trees would be won,” explains Shelley.

Every morning at 6am Shelley’s team of prayer warriors marched around an object in their own homes that represented the walls keeping Al and the trees from their healing.

“On the morning of the seventh day we all got together, earnestly prayed, marched and then sent out a huge shout of thanksgiving as the shofar trumpeted.

“I knew in the Spirit that the superbug had been broken and it was now time for restoration and healing,” says Shelley.

Black frost
However, the trees suffered one more devastating setback when the orchard was hit by a deadly black frost in the late spring of last year.

“Well, I said, ‘Devil, you are not stealing and destroying these trees, we have already won this war and you are not having your way here’,” says Shelley.

“Once again, each morning for seven days I marched around the trees in the Spirit, and praised our mighty Restorer for His healing Power and miracles!

“Praise God for His healing and restoration, Al’s health was restored and the trees no longer showed any effects of the fungus or the black frost,” she adds.

Shelley visited Al’s farm a few weeks ago to anoint the trees and blow the shofar around the orchard.

Miraculous recovery
“I was so blessed to see the miraculous recovery of all but about 25 of the 30 000 trees, which were looking healthy and starting to bloom, and all the ‘dead’ trees were shooting with abundant new growth!

“While I was walking through the orchard of pomegranate trees, it was raining steadily, which was prophetic, as if the Holy Spirit was gently falling on and over us in an incredible anointing.

“I felt so blessed to be a part of it all. It is incredible to see the power of faith through intercession, which has built my faith in The Lord incredibly,” says Shelley

Interestingly, pomegranates are known in Israel as the fruits the scouts brought to Moses to demonstrate the fertility of the “promised land” and it is traditional to eat pomegranates on Rosh Hashanah, because it symbolises fruitfulness.

Shelley says, for her, the pomegranate’s abundant red flowers and the fruit juice represent the blood of Yeshua.

“A pomegranate tree can produce for 50 years, which represents a Jubilee year, and there are 613 pips in a pomegranate fruit which corresponds with the 613 commandments in the Torah,” says Shelley.

Farmer’s testimony
The next testimony of the miraculous healing of the pomegranate trees was Al’s, the owner of the farm.

The first thing that struck me on arriving at the farm near Somerset East was how healthy the pomegranate trees looked; their foliage forming what looked like a huge bright-green blanket dotted with dazzling red blossoms blooming over the Karoo veld.

Al is a larger-than-life character from near Kansas City, Missouri, in the US. He came to South Africa to complete a short computer contract in 1969, but never left after falling in love with Caroline, his wife, the country and its great outdoors, fishing and hunting.

Al has enjoyed his life to the full; he has lived his dreams and acknowledges that he has had a blessed life.

Besides graduating as a chemical engineer and working in the computer industry when it was still in its formative stage, he has been a cattle farmer, ‘bush pilot’, owned and worked a commercial fishing boat off the Eastern Cape coast, became a professional hunter and outfitter, and started one of the first game farms in the Eastern Cape.

Although Al is a churchgoer, he is not reborn and believes very much in helping himself.

Unlike Shelley, whose life is determined by her faith, Al’s attitude is best described by the phrase “God helps those who help themselves”, which is not a Biblical scripture, but said by the English political theorist Algernon Sidney and popularised by Benjamin Franklin in his “Poor Richard’s Almanac” (1736).

“We were given a brain, two hands, two arms, and two legs; we have to get off our backsides to put bread on our tables. God didn’t put us here just to coast through life,” says Al.

“I ask for strength and guidance – not for miracles,” he adds.

Having farmed in the Eastern Cape for many years Al decided he wanted to farm with a permanent crop that he did not have to replant each year, is conducive to growing in fairly arid conditions, is drought resistant, and is potentially high in value, because of its demand in international markets, which is how the pomegranate project came into being.

However, Al’s source of funding for the pomegranate plantation project fell through, which left him carrying the financial can.

The situation came to a head with the freak black frost in September 2014 that literally destroyed both his first crop and a large percentage of the trees, because while pomegranates like winter frost, they don’t like a severe frost once the trees are in blossom.

The decimation of the pomegranate trees left Al in a situation in which he had exhausted his capital reserves as the project had required a huge financial commitment — having to buy and plant the trees, pioneer the entire drip irrigation system, and fertilise the trees for five years before the first crop of pomegranates could be produced, not to speak of employees’ wages and countless other incidentals.

Financial wipe-out
“Our first crop that was expected in April-May this year was totally flattened, as were two thirds of the trees. It was a financial wipe-out and my first real business failure,” says Al.

“I had reached the stage that there was nothing I could do and I did not have total faith that the Lord would work it out.

“However, Shelley, my close fishing pal’s wife, stepped into the gap, interceded for me and the trees and now, after I thought all was lost, the trees have miraculously revived and are thriving – even the dead trees.

“I am planning to establish an overhead spray system that protects the trees from frost and also look for a partner in the business.”

Al acknowledges that with the revival of the pomegranate trees the hand of the Lord has been active in his life, which has made him more aware of his personal relationship with God for which he is extremely grateful.

Shelley says it has been rewarding to not only see the revival of the trees, but the spiritual growth in Al.

Lessons from testimonies
Driving the 300-kilometres home I reflected on what had I learned about the miraculous from Al and Shelley’s testimonies.

One lesson was that faith and the miraculous are directly related. Without faith we have not the eyes to see, the ears to hear or the heart to accept the miraculous.

For the miraculous to be present in our lives we need to have at least some faith (like Al).

However, for the miraculous to be operative in and through our lives (like Shelley) we have to have great faith — live by faith, live beyond the point of reason, beyond the natural, scientific and physical by stepping onto the water of the supernatural where without faith it is impossible to be for more than one or two steps without sinking.

That is our challenge; as followers of Jesus Christ we are called on to live by faith for we: “are all sons of God through faith in Christ Jesus” (Galatians 3:26) and Christ dwells in our hearts through faith.

Furthermore, it is through our faith in Jesus Christ that we have been reconciled with our Holy Father and have a personal relationship with Him.

Faith takes us beyond the natural into the supernatural, from the material into spirit, and into the realm of the miraculous. It is by faith that we experience and extend the miraculous.

Faith both substantiates the miraculous and is miraculous in itself for: “having been justified by faith, we have peace with God through our Lord Jesus Christ, through whom also we have access by faith into this grace in which we stand and rejoice in the hope of the glory of God” (Romans 5:1-2).

I had been looking past what was within. For what can be more miraculous than having a personal relationship with Lord God Almighty and His Son, and having His Holy Spirit dwell within us?

What can be more miraculous than being able to communicate with the Creator of the entire universe and have Him answer, guide, correct and direct us?

What can be more miraculous than the King of kings taking an intimate and personal interest in each of us?

What can be more miraculous than being able to rest assured in His arms?