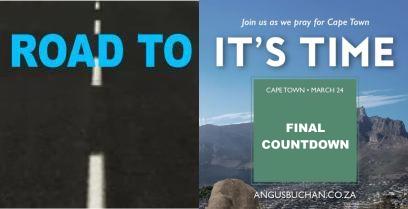 Ashley Cloete’s spiritual warfare journey through history reaches this weekend’s It’s Time Cape Town, an event which he believes is linked with God’s redemptive purposes for the Cape — to be a launch pad for revival in South Africa, Africa and beyond.

Thousands of Christians will be converging on Mitchell’s Plain on Saturday. A gathering of intercessors on Wednesday March 21 at the Swartklip Sports fields venue indicated that the It’s Time Cape Town is going to be epic.

I have decided to deviate from my original plan to continue the story where I left off last week. It would be impossible to do justice to the events of the last 50 odd years in that way. I will do that at a later stage. Instead, I want to concentrate now on the events of the last three years, starting with the Rhodes Must Fall campaign and the Western Cape ANC red-carpeting of Hamas in October 2015.

Ignition of the #Mustfall movement
The statue of Cecil John Rhodes on the University of Cape Town (UCT) campus triggered the Rhodes Must Fall movement. The first protest, and the action that started the Rhodes Must Fall campaign occurred on March 9 2015. The student protest was initially about the removal of the statue, regarded by the protesters as a symbol of oppression. It grew to encompass institutional racism, the perceived lack of racial transformation at the university access to tertiary education and student accommodation. Protesting students created a Facebook page entitled Rhodes Must Fall.

Hamas leaders red-carpeted
The red-carpet treatment of Hamas leaders by the ruling party in October 2015 had an immediate backlash in the spiritual realm. The ANC government went overboard in taking sides with Hamas in the Middle East conflict — in a display that was the very opposite of blessing Israel.

With no apparent connection — other than possible spiritual fallout — a flurry of Must Fall campaigns followed. Fees Must Fall and Zuma Must Fall campaigns soon became anarchistic as students resorted to occupation tactics, civil disobedience, and violence during their protests with extensive damage to property.

Government’s short-sighted actions were opposed by many believers, sparking an escalation of prayer.

A prayer event with Israeli pastor Baruch Maayan at Cape Point on December 11 2015 was organised at short notice as the result of a prophetic word from Jerusalem. The prophetic vision foresaw a wave across Africa shaking witchcraft and idolatry, and thereafter bringing increased kingdom harvest. Someone had to strike the waters off Cape Town with a staff. Around 50 intercessors attended, some coming from far-away places. The event transpired in the context of intense spiritual warfare during which the country reeled economically. On Wednesday December 9 2015 President Zuma had replaced the able finance minister Nhlanhla Nene – barely two years after he took office. In a shocking move that saw the rand plummeting, Zuma appointed a relatively unknown backbencher David ‘Des’ van Rooyen – who served as a member of the finance committee in parliament – to replace Nene.

It is impossible to gauge the impact of the prayer that was rallied on December 11 2015 but indications are that it was among the most impactful since our miracle elections of 1994 where prayer was clearly a driving force. Looking back it seems to be a miracle that Zuma had the courage to heed the economic rescue advice given to him by replacing Van Rooyen with Pravin Gordhan, a former finance minister with a good track record. The Rand recovered in resuscitation mode to a level near to where it had been before the appointment of Van Rooyen. Subsequently  believers would pray a few more times against the possibility of economic collapse as sinister forces seemed to collude to bring Gordhan down. Indeed Gordhan was later sacked and replaced by Mavusi Gigaba.

The parallel event a year later on February 26 2017 would become part of the run-up to a massive prayer event in Bloemfontein with a million intercessors from all around South Africa – divinely orchestrated in six weeks.

It is time …!
Crime, corruption and a general wave of negativity were sweeping across the nation during the first months of last year. Evangelist Angus Buchan announced ‘It is time …!’, and called South Africans to converge on Bloemfontein for a day of Christian prayer on April 22 — believing for a million believers to rock up. With only six weeks to prepare the task was However, the preparations had to happen in a space of six weeks. This would have been humanly-speaking impossible… but God!

From all around South Africa Christians came in their numbers, with vehicles of all sorts. Prayer plus modern technology enabled an event of a magnitude that would have taken ages to prepare not too long ago. Significantly, at the Bloemfontein It’s Time event, Buchan said that we would be able to witness the result of the day in parliament. This happened seven months later on Friday November 24 when 250 Christian leaders held a special prayer day in parliament.

As the year was drawing to a close many believers were praying that the nation would finally see the end of the corrupt presidency of Jacob Zuma, who had survived a no-confidence debate on August 8, despite a secret ballot which it had been hoped would free ANC members to express no confidence in their leader.

Zuma brushed off many exposures of corruption that became known as state capture and it seemed that it would take a miracle to unseat him before the elections of 2019. Even when Cyril Ramaphosa was elected as the president of the ANC on December 18, it looked like Zuma would hang on to the state presidency.

It’s time again!
In mid-January this year Buchan sent out a WhatsApp call for another It’s time in the Cape on March 24. Someone added Buchan’s name to a call for prayer for rain in the Western Cape on Wednesday January 24 at 1pm. This hoax message, which referred back to It’s Time 2017, spread rapidly through Christian social media networks and gained support in churches all over the country. Jericho Walls International Prayer Network posted a call to prayer on its website, saying: “Several groups asked for Christians to unite in prayer on Wednesday 24 January 2018 to pray especially for the water crisis in Cape Town, but also the drought that is plaguing nearly the whole country. “Pray as individuals, but try to unite in prayer in groups anytime between 12:00 and 14:00 or in the evening.” Despite the strange spark of this call to prayer, a flood of prayer followed and denominational boundaries crumbled as people came together to pray in all sorts of venues and in homes.

A divine response
Three weeks later, on Tuesday February 13, there was a strange dark cloud hanging over the centre of Cape Town. This was followed by an unprecedented extended roar of lightning and thunder. It felt as if God was speaking. And then the news came that President Zuma would resign! The nation had to wait till the late hours of February 14 before he finally agreed to go. There must surely have been divine intervention because he was clinging to power just like Robert Mugabe had been doing in Zimbabwe a few months earlier.

Preparations for March 24 at Mitchells Plain
Daniel Brink of Jericho Walls called believers to join in 24/7 prayers in the weeks before the big It’s Time event — including prayer meetings at the venue, the Swartklip Sports Complex between Mitchell’s Plain and Khayelitsha on the Wednesdays prior to March 24.

Every week a few more believers turned up to pray at the venue, and on Wednesday this week, which was the Human Rights Day public holiday, the number of prayers swelled considerably. During the meeting Pastor Barry Isaacs rose to the occasion in his introduction to prayer for racial reconciliation. He noted that he has not experienced such naked racism in his 50 years of ministry as he had in the recent past. Indeed, it seemed as if the government’s support for a bill calling for expropriating property without compensation had unleashed unparalleled racial hatred, he said.

Isaacs challenged his audience “not to wait till tomorrow” for racial reconciliation, but to pray with someone from a different culture ! Daniel Brink responded by asking Alfie Fabe, a “Coloured” pastor to stand opposite him. Brink asked all Afrikaners to stand with him and all people who had been affected by the forced removals were asked to join Fabe.

Brink then put the cherry on the cake with a moving, prayer of repentance on behalf of his people — Afrikaners –not only for their attitudes of racial pride, prejudice and arrogance, but also for the forced removals of people of colour and the brutal practices that had accompanied that and the implementation of other apartheid-related laws.

While tears were flowing freely, Pastor Fabe extended forgiveness to the Afrikaners and also asked forgiveness from God for the anger, bitterness and rancour towards all “White” people. Pastor Theo Roman made a moving confession on behalf of  “Coloureds” for their bitterness due to feeling sideined first by “Whites” in the previous era and thereafter by the present government.

A wonderful sense of unity permeated the whole area as an old Afrikaans chorus was sung repeatedly thereafter, accompanied by a Mitchells Plain string band. It stressed what it was all about: Jesus did not come to judge but to save us:

— We call Him Saviour because this is His rightful name!