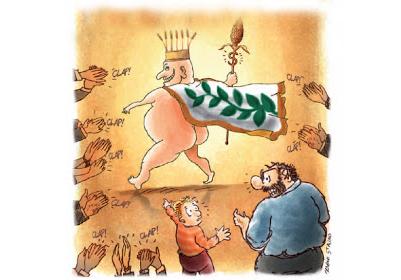 By Conrad Mbewe — via ChristianView Network

Even if you try to bury your head in the sand, you can still hear the tremor in the ground of the Western carnival that is coming. The music and dancing are getting louder and louder. It is one of human-rights-with-no-holds-barred. It is coming with all the revelry that you would expect. It cannot be ignored.

However, one problem with this procession is that it has long ago left its original route. There are no principles to guide it, except the whims of those who are hiding behind its masks and leading it in whichever direction they please. Even those of us who are in Africa are totally alarmed by its lack of principles.

The other problem is that the issues being fought for under the guise of human rights are so patently wrong that an African like me stands aghast as I look at the current campaigns, debates, and legal reforms in the West. I am asking myself, “But can’t everyone see that the emperor walking in front has no clothes on?”

A century or two ago, Christian missionaries came from the West and taught us the Bible. As a result of this, we did away with polygamy, cannibalism, tribal feuds, etc. We were taught to put on more clothing to hide our nakedness. We learned to desist from tattooing our bodies, which were now temples of the living God. We even stopped sacrificing our babies to ancestral spirits.

The perplexing turn-around
All this made sense. It was logical, once you realised that we were all created by God and in his image. But, alas, the very principles that we were taught from Scripture are now being abandoned wholesale by the countries where our missionaries came from! Sadly, the basic questions are not being answered in this turn-around. As a result, we are bewildered. A few examples should suffice:

Abortion: Who in the West does not know that life begins at conception? It must be obvious to all, therefore, that abortion is murder. Surely, we all know that we are killing fellow human beings in their mothers’ wombs in the millions every year. How come, then, that this reckless killing of babies is not being stopped?

Indecency: It is shocking to see what some adults wear when they leave their homes in the West. They leave very little to the imagination! As if that is not enough, billboard adverts all over the cities are full of naked women, or men and women poised in sexually suggestive positions. As for television and movies, indecency seems to be the stock of the trade. Add to this, public erotic kissing at stations and airports, etc. When visiting the West, I often feel like shouting, “Hey, guys, am I the only one around here who knows that all this is indecent?”

“Living together”: It is commonplace now in the West to have a man and a woman living together who are not married. Their parents know it and they just shrug their shoulders. How? I mean, how? How can a man start living with your daughter without getting your permission, as if she just fell from the sky? Surely it must be wrong. But again, are we the only ones who are seeing the obvious?

Homosexuality: Another bane of the West. Men are insisting on being given the “inalienable right” to have sex with fellow men. For me, this defies basic logic. I mean, how? The anatomy itself suggests that it is not possible. But, again, it does not seem obvious to everyone. This question is made even more pertinent when entire Christian denominations in the West that once sent us missionaries are passing laws to ordain homosexual clergy. I mean, how? Isn’t it patently wrong? We thought the Bible is clear on this matter, or are we reading different Bibles?

The world seems to have gone full circle. It was the West, through its Christian missionaries who taught us decency and propriety but now Western society is walking around half naked. It was the missionaries who taught us that marriage comprised one man and one woman for life, but now their own kith and kin are totally defacing this concept. It was the missionaries from the West who stopped us from sacrificing our babies but now millions of babies are being slaughtered in the West in their mother’s wombs. As for tattooing, don’t even talk about it.

Well, while I am asking these basic questions, the carnival is getting closer. It is coming. Not too long ago, the Secretary General of the United Nations, Ban Ki-moon, visited Zambia. And on the day of his departure, he stated publicly that as a nation we should give equal rights to homosexuals. The whole nation, which took little notice of his presence until that moment (as we have bigger issues to worry about than political exchange visits), was suddenly buzzing with alarm!

I mean, how does an adult come all the way from Korea or America, or wherever it was he was coming from, and tell people who are battling real starvation and endemic corruption to allow males or females to be having sex with each other? Everyone was asking if there were no more pertinent issues for him to talk about. He was obviously straining a gnat, while swallowing an entire camel here.

The intolerant mindlessness
Let me repeat. The basic problem with this carnival is its mindlessness. There is no principle by which to hold truly intelligent discussion. It is being referred to as Post-modernism. It is the claim that ultimately there is no truth. Everything is relative, and so you must keep your opinion to yourself. Hence, someone said, “Let us get rid of religion—whether it is Islam or Christianity. It is just inhibiting us. What is important is that we love one another and care for our planet.”

But that is the point! Who determines “what is important”? Is it some collective feeling of intuition or hunch? Come on! Let’s face it: ultimately, we must have a final objective authority somewhere. We must have a non-moveable starting point. Christianity says that point is, “In the beginning, God created the heavens and the earth.” We may disagree on some finer details but let us be clear: an intelligent moral being created us, and one day we must give an account to Him.

Again, we are back to the emperor and his lack of clothes. In the ecstasy of Western carnival euphoria, adults nod at each other’s claim that science has proved that no one created this finely balanced and intricately complex universe. Everything was simply produced by a big bang aeons ago. They call that education. Surely, even a child can tell us that where there is a design there must be a designer. Even a child can see that the emperor doesn’t have his clothes on.

Sadly, this mindlessness is becoming intolerant of dissenting views. It sounds familiar. When an older generation here in Africa tried to hang on to the empty ways of our forefathers after the Christian missionaries taught us better, many of them simply refused to reason with the younger generation who were questioning the traditions. They would simply insist, “Ni ‘ntambi!” [“It is our culture!”]. In this way, they would halt all intelligent discussion. Any questioning was deemed high treason and serious repercussions would follow.

Sadly, I seem to be hearing the same song being sung in the Western carnival that is getting closer. Laws are being passed to the effect that anyone who says anything against homosexual practices, for instance, is liable to be prosecuted. It is being called “hate speech”, even if all you are doing is to show its abnormality and senselessness. At the rate we are going, it will be hate speech for me to say, “Look! The Western emperor has no clothes on!” Oops, I have already said it.