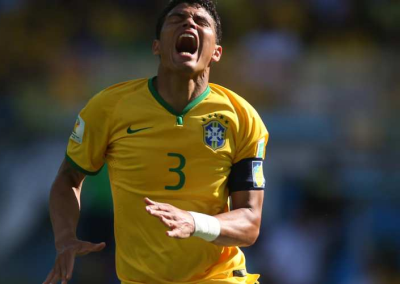 Thiago Silva is one of the top stars in Brazil’s national soccer team.  So important was he to this year’s team that many sports commentators blamed the country’s first and only loss in the semifinals of this year’s world cup to the fact that Thiago was prevented from playing that game.  But what people just recently learned in this mini-documentary about Thiago’s life, is that abortion nearly took Thiago’s life before he ever had a chance to take a breath, much less kick a soccer ball.

Thiago Silva now lives the gilded life a soccer star playing in the big leagues in Europe.  He lives in Paris and plays for the French champions, Paris Saint Germaine.  In addition to his great skill as a defensive back, Thiago Silva’s deep Christian faith before and after the matches, when he is often seen praying, is evident.

As CS Lewis wrote “there are no ordinary people” and Thiago Silva is a great example.

Although Thiago Silva was born to a desperately poor family that lived near a dangerous shantytown in the city of Rio de Janeiro, he was able to overcome these hardships and achieve great success in the eyes of the world.

As a professional soccer player, Thiago Silva has won many prizes, including being named as one of the top 11 players in Europe for three consecutive years.  But surely none of his professional achievements would have meant anything without the most amazing gift of all, the respect that his mother and grandfather had for Thiago’s God given right to life.

A report made by Globo TV Channel, the largest TV station in Brazil, revealed that Thiego’s mother, Angela, already had two children – a boy and a girl – when she became pregnant with Thiago.  She was convinced she couldn’t afford to raise another child, and despite feeling terrible pain at the thought of aborting her baby, she was convinced she had no other option.

“I was sitting on my father’s lap and I cried a lot. I didn’t want to have an abortion but I couldn’t bear another child,” she said. Angela’s father, however, convinced her not to abort the baby. “My father did not allow me to commit this sin,” recalled Angela.

Poverty and illness loomed large in Thiago’s childhood.  When he was 14, he suffered from tuberculosis. “It was the greatest battle of my life. I had to stay in the hospital for 6 months until I recovered.”

Living a mere 50 meters away from one of Rio’s infamous shantytowns, the famous soccer center back could have easily turned to a life of crime. “We would always hear shootings. The cops would come to the borough where I lived often. When I got home I would thank God for getting home safe.” But instead, Thiago chose to follow God and pursue his dream of becoming a professional soccer player.

Life had never been easy for Thiago and his professional life was no different.  Thiago failed to get onto local Brazilian teams at first and ended up in a second rate local team from a poor area of Rio de Janeiro.  But with hard work and discipline his initial failures soon turned to success.  He finally got his chance to be seen in Europe when he was signed by a Russian team. He was eventually signed to play for the French powerhouse Paris Saint German. He now earns annual salary of $16 million/year.

Thiago’s story of courage and determination is an example of why we should never give in to the temptation of determining another human being’s potential in life, especially that of an unborn child. Thiago could have been aborted, but he wasn’t. He could have chosen a life of crime, but he didn’t. He could have given up his dream, but he persevered.  Now, he is one of the best center backs in the world and an inspiring reminder that every life is worth living.

A person’s worth should never be measured by what they achieve, and therein lies the greatness of Thiago’s mother’s decision.  She knew the chances that the world would give a child from a poor family growing up in the Brazilian slums surrounded by disease and crime.  The fact that Thiago didn’t succumb to his environment is as much a credit to God as it is to Thiago and his family.  This is the miracle of a Christian life which allows God the opportunity to transform every single person from the lowest depths to the greatest heights.