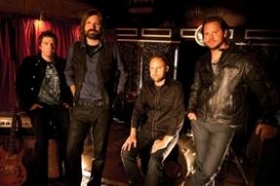 Drawing on real-life experiences near to the hearts of its members and extended family of friends, GRAMMY, AMA and Dove Award winning, Atlanta-based rock band Third Day uses the issue of adoption as a metaphor for God’s love in the video for its latest single, “Children of God.”

“Children of God” is the second single from the band’s 11th studio project, Move, and features footage of families with adopted children, denoted by t-shirts emblazoned with the word “adopted.” The families (including that of Third Day’s lead vocalist Mac Powell, who recently welcomed adopted son Emmanuel and daughter Birdie) eventually all don the signature white t-shirts, revealing the idea that we’re all adopted into the family of God.