Originally published by The Christian institute


Thousands of ordinary people committed to the sanctity of life marched to show their support for the unborn in Croatia’s capital city.


An estimated 15,000 people marched in Zagreb with over 5,000 people also demonstrating in Split earlier this month.

The march is one of a number of pro-life events that have been taking place around the world so far this year.

Croatia currently allows abortion on demand for the first ten weeks of pregnancy.

Banners with the slogans “Chose Life” and “Life is always a Gift,” were on display. Organisers said the aim of the march was to “draw attention to respect of every human life – from conception to natural death”.

A pro-life petition, believed to have tens of thousands of signatures, will be presented to the Croatian Government. 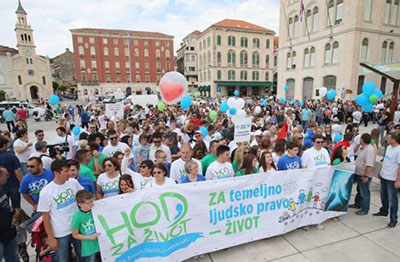 Earlier this year, the Constitutional Court of Croatia recommended that the existing abortion law is changed by Parliament within two years.

In recent months, pro-life events have taken place around the world, in countries such as America, Canada and Italy.

Last week in the UK, thousands of people took to the streets of Birmingham to share their pro-life message, despite opposition from pro-abortion activists.

Marchers congregated at Victoria Square to hear from speakers and to voice their opposition to the Abortion Act – 50 years after it was passed.