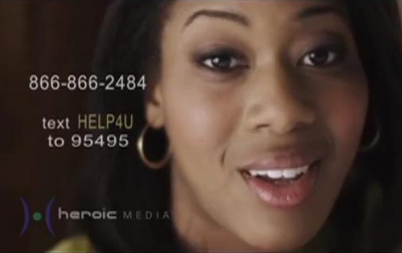 More than 2 400 viewers responded to an advertisement offering help to women in crisis pregnancies, which aired over 50 times on Black Entertainment Television (a US cable network) during summer 2012.

“Women deserve to know about the compassionate help that is available to them, and this campaign accomplished just that,” Heroic Media CEO Brian Follett said in an August 8 statement about the results of the advertisement that offered referrals to local pregnancy centers.

“We are thrilled with the 2,400 responses and can’t wait to reach even more women with messages of hope in the coming weeks and months,” said Follett.

Heroic Media’s “call for help” message included a toll-free number for the national “Option Line.”  Viewers could call or send a text message for resources and information about alternatives to abortion.

The advertisement aired on Black Entertainment Television was targeted toward women facing abandonment or other consequences of an unplanned pregnancy. In it, a woman tells viewers: “A baby is a life you created – a baby that will love you, and need you, in return.”

The message stresses the availability of help, telling women they “don’t have to do this alone.”

Public response to the pro-life ad is “encouraging,” said Marissa Gabrysch, Director of Marketing, Research and Communications for Heroic Media. She said the response numbers “represent women who are responding to hopeful messages and finding compassionate, practical and free services.”

Heroic Media has run four national television campaigns since 2010. During 2011, the company received more than 146,000 inquiries in response to its messages promoting pregnancy options online, through television, and in outdoor advertisements.