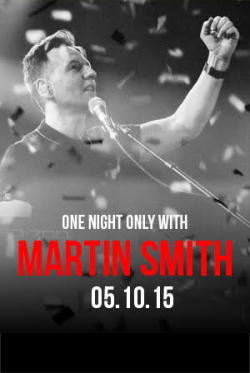 Martin Smith (of the worship band Delirious?) will be leading worship in Johannesburg on Monday, October 5, as part of the NCMI World Equip, taking place from October 5 to 9. Those who register for the NCMI World Equip at http://ncmiequip2015.co.za will gain entrance to the event, but tickets are now also available for those who want to only attend the Martin Smith event on the Monday night.

Tickets for Martin Smith are R230 and are available from iTickets (https://itickets.co.za/events/348972.html). Doors open at 5pm with worship kicking off at 7pm.

For Martin Smith, endings aren’t all they seem. In 2009 he came to the closing stages of a two-decade career spent holding the microphone and cheering on the crowds with the genre-defining band Delirious? With Dove awards, Grammy nominations and RIAA certified gold selling status behind him, it was an incredible journey.

Having written or co-written many of the best-loved songs – including I Could Sing of Your Love Forever, History Maker and Did You Feel The Mountains Tremble? – Smith remains rooted in the local church. And having pulled together many of the world’s leading worship leaders to give their time and talent for free with the CompassionArt charity project, he instinctively calls out for people to become a ‘voice’ for those who do not have a voice.

From 2012 – 2013 Martin Smith released his God’s Great Dance Floor series of albums, culminating in a compilation album of the best songs in the series in 2014’s Back to the Start. He remains a passionate model for all musicians today and his new album features co-writes with such artists as Michael W Smith, Chris Tomlin, Tim Hughes, Rend Collective, and Reuben Morgan.

A song from this album, Waiting Here For You, is sung in many churches today. Check out the video: