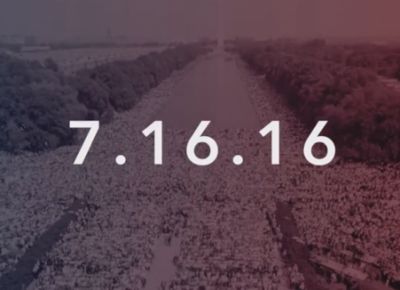 Originally published in The Christian Examiner

Evangelist Nick Hall looks back at the history of revival movements on US soil – from the First Great Awakening of the 1700s to the Jesus Movement of the 1970s – and he asks a simple question: Why not now?

For the past three years, Hall and his team at PULSE have prayed for and worked toward an event on the National Mall they hope will bring 1 million Christians from all races and denominations to Washington, DC, to stand for Jesus and unite in pray for the nation and the world.

That event – called Together 2016 – will finally take place on July 16 when more than 40 well-known speakers, authors and recording artists will gather in what organisers hope is the spark of another revival movement.

A true Jesus movement
“This generation really hasn’t experienced a true Jesus Movement, a true unity movement,” Hall told the Christian Examiner, referencing specifically the First Great Awakening, the Second Great Awakening, Azusa Street Revival, Youth for Christ Movement, and the Jesus People Movement – all of which took place in colonial America or after the nation was founded.

“This is a chance to define our generation. We’re really praying and believing that God can do it again.”

Cause-driven generation
As the Together 2016 website says, the rising generation is “the most cause-driven in history,” but “our causes are pulling us apart.”

“Even religion doesn’t unite,” the website adds. “We believe only Jesus can bring us together.”

“We’re living in an age where we have all these megachurches and mega-ministries, and yet we all focus on our own thing,” Hall told CE. “There is this urgency in my heart and in our team’s heart to say: We need to come together, we need to lift up Jesus.”

It is no coincidence that Together 2016 is taking place in the middle of an election year, when the nation is as divided as ever, he added.

“God doesn’t do coincidence,” Hall said. “We’re as non-political as you can be. … We just believe that Jesus wants to meet each and every person right where they are. Being that this is an election year, we hope that this can be a rallying point for the entire nation. There is so much attacking [one another] that doesn’t match up with what we see in the life of Jesus. And yet we have the chance to rally our attention back to where our hope is found.”