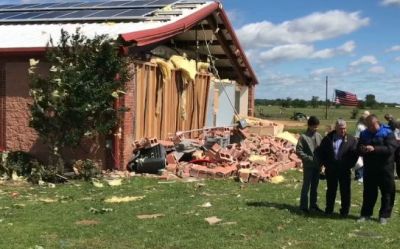 Tornadoes in East Texas tore through homes, offices and churches — but didn’t touch the hallway where 45 people were crying out to God.

“Praise God because we walked out,” Monica Hughes, a youth pastor, says.

Around 45 people were at St John the Evangelist Catholic Church in Emory, Texas, when they were told to take cover immediately.

As soon as the group gathered in the hallway, the tornado tore through the church’s sanctuary and blew out both ends of the building.

“We could see the beams bending and the aluminum roof being ripped away,” Hughes said. “Everybody dropped to the floor and protected one another. As soon as the worst was over, we began to sing to keep the kids calm.”

The weather bullied through much of eastern Texas over the weekend. On Sunday, the day after the storms, the parishioners of St John the Evangelist gathered outside to hold Mass.