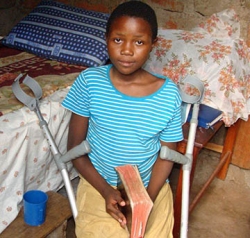 BWERA, Uganda – A 15-year-old Christian girl in western Uganda who lost the use of her legs after her father locked her in a room for six months for leaving Islam has begun to take tentative steps.

Susan Ithungu of Isango village, Kasese district, had been hospitalized since September 2010 after neighbors along with police rescued her from her father, Beya Baluku, who had given her hardly any food or water. He was arrested shortly afterward but quickly released. She and her younger brother, Mbusa Baluku, lived alone with their father, who was divorced from their mother.

In March 2010, Susan had trusted Christ for her salvation – prompting her father to threaten to slaughter her publicly with a knife. Pastor Joseph Baluku of Bwera Full Gospel Church in Kasese said neighbors who discovered that the girl was locked in a room with almost no food or water notified authorities.

After Compass published her ordeal on Aug. 11, 2011, several individuals and ministries came forward to help her.  She now lives in a rented house in an undisclosed location.

“Well-wishers have been paying the house rent and buying me food and clothing,” said Susan, who added that she has forgiven her father.

A member of the Bwera Full Gospel Church in Kasese, Biira Dreda, left her own four children under the care of her mother in order to look after Susan while she was hospitalized.

“It is now becoming difficult to meet the school fees for my own children,” Dreda said. “I am praying to get some little funds so as to start an income generating project.”

A member of a Pentecostal church, Susan has begun to walk with support. She cannot squat or stand upright because she lay on one side for such a long time, besides suffering a bout of malaria.

“I thank all those who have continually supported me spiritually, materially and even morally,” Susan said. “I am also thankful to Biira Dreda, who stood by me in the hospital, and to date she is still with me when none of my family members has come to see me. I now take Dreda as my mother because of her care and love. My own people have abandoned me.”

Jacob Mukobi, who works with Uganda police as a child protection volunteer, was tipped off that Susan had been locked up in the house for six months.

“When I got the horrifying message about Susan that she had been put under house arrest for converting to Christianity, I went with the police to the house on Sept. 6, 2010 and took her to Bwera hospital,” he said.

Her father, he said, is not ready to take her back.

“A neighbor heard Susan’s father saying that she will be accepted back to the family only if she recants the Christian faith and rejoins Islam,” he said.

When Mukobi asked Susan’s father about his mistreatment of her, he said only that he was upset by her conversion to Christianity, Mukobi said.

“I do not like my daughter calling herself Susan and leaving her Muslim name, Aisha,” Mukobi said Baluku told him.

On Oct. 22, 2010, Susan was referred to Kagando hospital, about 20 kilometers (12 miles) from Bwera. Six months later, she was referred to Curso hospital in Kampala. She still could not walk. Surgeons operated on both her thighs, but as a doctor tried to stretch her leg, one thigh bone was so weak that it broke.

She returned to Kagando hospital after two weeks, but with her condition deteriorating, after two months she was referred to Kilembe hospital, about eight kilometers (five miles) from Kasese.

Though she has had to drop out of school, she said she hopes to return this year.

“I am now able to handle a pen and write,” she told Compass late last year. “I am able to sit down for at least one hour, and I hope by next year it will be much better, enough to enable me go to school.”

Pastor Baluku said that “many Good Samaritans” came to her aid.

“Susan at the moment needs a balanced diet to strengthen her weak bones, so that she can go to school soon,” he added.