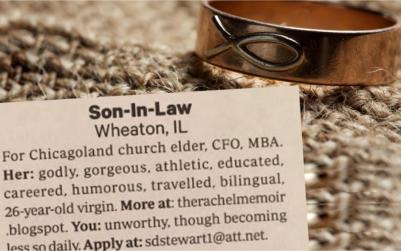 How far will a father go for his daughter?

The daughter, Rachel Stewart, says she was tipped off by some “sympathetic women” in the comments of her blog.

“So naturally I called my dad at work and asked if he knew anything about a personal ad in the leading evangelical magazine envisioned by Billy Graham,” Stewart posted.

“His response was revelatory, ‘One second. Let me close my door.’ Then came his unapologetic admonition about the entire thing that concluded with him reading it to me. Impressed, but not surprised, I laughed and then hung up. It wasn’t a minute later that I received a text from my mom saying, ‘I hear the cat is out of the hat.’ Her Puerto Rican version of the expression was the perfect gesture to remind me why I love my parents.”

The ad, placed in the jobs section of Christianity Today, says the future son-in-law is “unworthy, though becoming less so daily.”

For her part, Stewart is taking it all in stride.

“I’m not angry or embarrassed.
“I’m just nervous if this doesn’t work out, next I’ll find my face plastered on a billboard.
“Oh gosh, now I’m giving him ideas.
“*Sigh*
“I need a special kind of love.
“This is gonna be fun…” she posted.