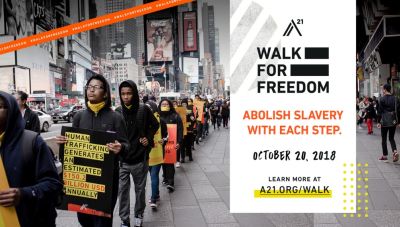 On October 20 thousands of people in hundreds of cities across the world will be walking in single-file, dressed in black as they participate in Walk For Freedom events to raise funds and awareness for the fight against human trafficking.

Human trafficking is the fastest-growing crime in the world today and there are more people in slavery now than at any time in history, with 27 million people in captivity, including nearly a quarter of a million slaves in South Africa. Areas of exploitation include forced labour, bonded labour, domestic servitude, child soldiers and sexual exploitation.

According to A21, the global anti-trafficking organisation that is hosting Walk For Freedom events around the world for the fifth consecutive year, 99% of human trafficking victims are not rescued and only 1 to 2% of trraffickers are convicted.

“We believe that when we all show up locally , we will have an impact globally . In our cities, in our communities, in our world. One step at a time, we fundraise and walk to see a world without slavery,” says A21 on its website.

There will be 11 walks in South Africa, at Braamfontein, Cape Town, Colesberg, George, Hermanus, Mthatha, Nelspruit, Paarl, Port Elizabeth, Pretoria and Randburg (Click on the links for more info or to register).

Other African nations where walks are planned are Namibia, Kenya, Uganda, Nigeria, Ghana and Benin.

View the Walk For Freedom 2018 video below: