God wants South Africans to gather for another “It’s Time” event — and it will be the biggest prayer meeting ever seen in Southern Africa, said Angus Buchan in a special announcement released on video this evening.

“This is probably the most crucial prayer meeting of all,” as the country “is on a knife-edge” with unrest in the nation ahead of elections next year, said the farmer-evangelist, who called the historic open-air It’s Time mass prayer events in Bloemfontein on April 22 last year, and in Cape Town on March 24 this year.

He said the Lord gave him a very clear instruction through His Word on Sunday, to call another It’s Time event. He said he was not at liberty to say when and where the prayer event would be, but would make an announcement as soon as those details were confirmed. He said latest information would be posted on www.angusbuchan.co.za

All he could say now was that the big prayer gathering would take place “very soon”, on a Saturday and on an open field, and it would be free.

He urged Christians to “tell every person in SA and in surrounding countries to get ready for a prayer meeting which will be the biggest prayer meeting that we’ve ever seen”. 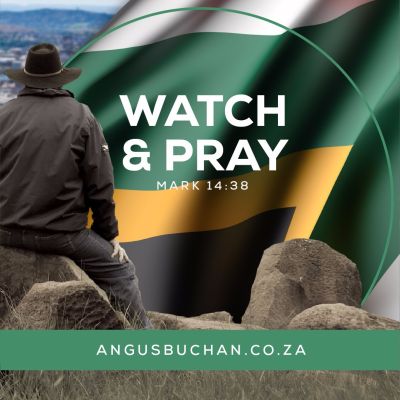 “At Bloemfontein we had over a million people. I’m believing for more than that. And remember at Bloemfontein we prayed and there was a change of government, they shelved the nuclear power station, the rand strengthened — they were singing choruses and hymns in parliament, and many other miracles.

“Then we went to Cape Town that had had no rain for three years. The only city in the world with no water. We came as a people. We repented and prayed and God answered our prayers and there is plenty of water in Cape Town,” said Buchan.

He said people of all races, ages and sexes would come together as a people before Almighty God The Miracle Worker at the upcoming It’s Time event.

Meanwhile, he urged people to pray everywhere “so that the Lord Jesus Christ can intervene on behalf of our people.”

On the 5th of August, the Lord told me very clearly, through His Word, that we are going to…