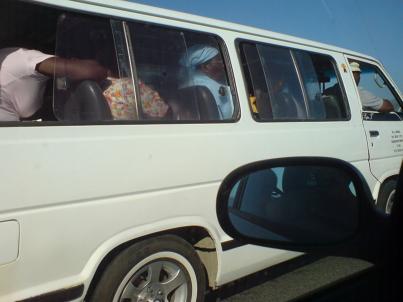 At the beginning of the year a group of Christian leaders and intercessors facilitated a prayer for the Western Cape taxi industry. Taxi leaders had approached the Church to host this prayer after two of the senior leaders from the two biggest taxi associations were invited to a day of repentance and reconciliation for the atrocities of apartheid, political violence and taxi wars in Crossroads.

Gateway News reported the prayers of the 4th and 21st March 2012 and the meetings leading to the big events. The prayers were well attended and a resounding success, and produced much fruit. The prayer on March 21 at Philippi Stadium was just a few days before the Easter weekend.

Easter weekend is one of the busiest seasons for the taxi industry with people going to churches across the country, children going away for the school holidays and long weekend holidaymakers travelling. Usually dozens of people die on the N1/ R61 road between Cape Town-Beaufort West-Aberdeen-Cradock, during the holidays and especially on Easter weekend. This Easter there were no accidents on the roads – NONE. This was confirmed by the MEC for Transport in the Western Cape. The taxi leaders reported that this had never happened before in the history of the Western Cape taxi industry.

We have to come alongside these men and women. They have carved a self-deprecating image through their reckless driving, profanity, violence and lawlessness – and they realise this now.

There has been a lot of bloodshed in the industry and this blood, like Abel’s, is crying out for justice; Jesus is the only one who can quiet this blood-guiltiness. There is also a culture of violence, to which some people have become accustomed; they have to learn a different way of dealing with their disagreements. The kings and prophets of the Old Testament killed anyone they disagreed with – because that was the ‘lingua franca.’ In the New Testament Peter had to learn a new language of love, forgiveness, tolerance and peace – as opposed to the language of the sword.

In a recent meeting with stakeholders in the taxi industry, the Western Cape Provincial Minister of Transport and Public Works, Robin Carlisle, mentioned a few interesting statistics about the taxi industry:

There is a long and precarious road ahead for these men and women before realising the blessings trapped in the taxi industry.
Christians and the Church have to keep cautioning the taxi leaders, ‘if you try to build without the Lord, you build in vain,’ (cf. Psalm 127: 1).