[notice]Our weekly update from Sean Gooch, one of the worship leaders in the 30-day Olympic Burn in London (30 days of non-stop worship and prayer throughout the Olympics) at Cornerstone Church just 5km from the Olympic Park.[/notice] 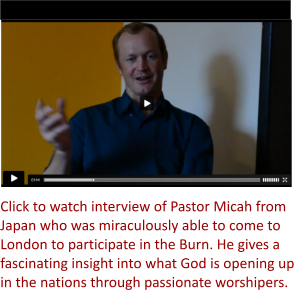 Just as 70 000 Olympic volunteers on Monday enjoyed a privileged preview of today’s keenly anticipat4ed Olympic Games Opening Ceremony, worship leader Sean Gooch feels that those participating in the 30-day Olympic Burn (non-stop worship and prayer throughout the Olympics) are getting a privileged heavenly preview.

“I felt….that the Lord was inviting the burners (who are also volunteers in a sense, desiring heaven’s as opposed to man’s pat on the back) to a preview of the coming celebration of the marriage of the Lamb — way better than £27 million can produce,” said  on this unique outreach aimed at impacting nations with the love and power of Jesus.

“We led a slot on Monday night which was a powerful time of encountering Jesus and releasing his blessing on the city as well as praying for a couple looking to set up a 24/7 prayer base in Cambridge and our Romford group who aim to keep running with the ‘Burn’ baton in east London after the Olympics are over,” he says in his update.

He also says that the first “healing on the streets session” went out from the Burn on Wednesday. Hopefully we will soon receive details from this street ministry venture.