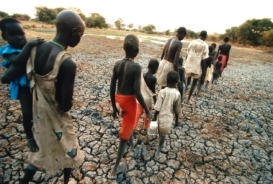 [notice]At a time when xenophobic outbursts put the spotlight on refugees in South Africa, columnist Pastor Bongani Mgayi challenges the Church in SA to look beyond our borders to the root issues that cause people to flee their home countries.[/notice]On the 20th of June every year people around the world observe World Refugee Day, to draw attention to the plight of millions of refugees worldwide who are forced to flee their homes. Refugees are created by political dissent, economic struggles and failures and atrocities in people’s home territories. The matter of refugees is a particular challenge for South Africa, as Africa produces millions of refugees.

A Cape Times article on 25 June 2012, reported comments made by ANC Western Cape provincial secretary Songezo Mjongile, who called for foreign spaza shops to be curtailed in the townships, citing that the foreign-owned shops have out-muscled local owners. The article was subsequently followed by a few opinion pieces in the press on xenophobia and refugees by among others Mayor of Cape Town, Patricia de Lille and former minister of science and technology, Mosibudi Mangena.

A few months ago Helen Zille, made what some called a blunder, by referring to pupils from the Eastern Cape as refugees causing strain on the resources of the Western Cape. Ironically, Mosibudi Mangena, proudly affirms that he was a refugee and that indeed refugees are a burden on the hosting country or community.

How to deal with refugees?

Now, if you were president of the country or had some power to wield, how would you deal with the issue of refugees? Before you answer, Christian, lets refer to the Bible.

In 1 Samuel 25: 4-11 we read: “When David heard that Nabal was shearing his sheep, he sent ten of his young men to Carmel with this message for Nabal: “Peace and prosperity to you, your family, and everything you own! I am told that it is sheep-shearing time. While your shepherds stayed among us near Carmel, we never harmed them, and nothing was ever stolen from them. Ask your own men, and they will tell you this is true. So would you be kind to us, since we have come at a time of celebration? Please share any provisions you might have on hand with us and with your friend David.”

“David’s young men gave this message to Nabal in David’s name, and they waited for a reply. “Who is this fellow David?” Nabal sneered to the young men. “Who does this son of Jesse think he is? There are lots of servants these days who run away from their masters. Should I take my bread and my water and my meat that I’ve slaughtered for my shearers and give it to a band of outlaws who come from who knows where?”” (New Living Translation, emphasis added)

Of course, South Africa has its own internal challenges, such as unemployment, health care and education. As a result some proclaim, ‘charity begins at home’.

But, many of South Africa’s politicians, poets, musicians, authors and social activists were refugees in foreign territories and these countries shared what little they had. Is there an obligation to be kind and to share the provisions South Africa has? Should we treat the refugees as friends?

What role will South Africa play in Africa? Will we be like Nabal?

Pastors and Christians from the rest of the continent often speak of South Africa as a big brother and role model, or even a vessel of hope for the continent.

What shall we make of the challenge articulated through many prophecies of a flame starting in Cape Town and spreading through Africa to Cairo? What is to be the form of this flame – is it the spreading of the Gospel; missions to Africa; economic development; safety, liberty and peace?

The issue of refugees is complex and filled with all sorts of emotions. However, one thing is certain:  if Christians in South Africa do not do anything about the problems faced by our brothers and sisters in foreign countries such as Nigeria, Mali, Kenya, Somalia and Egypt, where the Church is persecuted, we are going to host more refugees in South Africa.