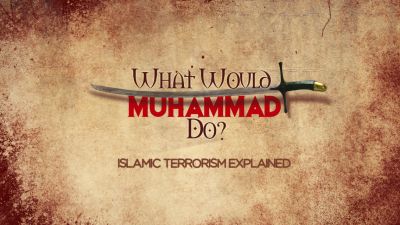 What Would Muhammad Do? , a 10-part documentary series on the connection between the first generation of Muslims in the 7th Century and modern-day Islamic terrorism was launched in Brussels today, on the eve of the 15th anniversary of the 9/11 terror attacks in the United States.

Taking advantage of a media opportunity to preview the series last night, I managed to view the first four and the final episodes of the production by US television host Randall A Terry, who holds a master’s degree in diplomacy, with a concentration in international terrorism from Norwich University.

It is not pleasant viewing. But it is enlightening. Quoting Winston Churchill he said it is important to “know your enemies” – and Islamic terrorists see themselves in a war to establish a global Islamic state (caliphate). Churchill studied Hitler’s writings and speeches at a time when the west preferred appeasement and to look the other way. He was derided for his alarmist approach but later relied upon to lead Britain’s war effort to stop Hitler’s evil global agenda.

In America today, where political correctness reigns, it is not acceptable for the security establishment to study religious texts in order to understand the reason for beheadings, suicide bombings and terror attacks around the world. Reasons that make sense in a western culture of tolerance and freedom – such as poverty, or land disputes with Israel – are suggested. Not so, says Terry. To grasp the motives and goals of Muslim terrorists, one must study Muhammad’s example — his words and deeds — that today’s Muslim terrorists claim to imitate, he says.

Quoting from the Quran and the Hadiths (a collection of writings on the sayings and practices of Muhammad which together with the Quran is the major source of guidance for Muslims) Terry illustrates that actions such as killing of critics of Muhammad, killing of apostates (people who leave Islam), taking sex slaves, killing homosexuals, hatred of Jews and Christians, and forced conversions at the threat of death, are consistent with the traditions and words of Muhammad. The Islam founder’s early disciples – and modern disciples who study his practices, follow his example, sincerely believing they are carrying out the will of God. While politically correct western leaders look for other reasons to explain terrorism, the Islamists readily acknowledge they are following the example of Muhammad.

An interesting part of the series deals with the battle of Badr in the year 624 where Muhammad and his followers at Medina surprisingly defeated the army of Mecca in a battle which Muslims attribute to divine intervention. The battle victory was a turning point for the young religion and saw Muhammad’s religious writings and traditions abandon ideas of tolerance and forgiveness in favour of religious conquest and merciless subjection of the infidel (non Muslims).

Terry warns that Islamists are waging war against basic human freedoms and that as in the case of Hitler, turning a blind eye and appeasement, play into the hands of the aggressor. He proposes various strategies including sharing the love of Christ with Muslims, speaking the truth about Islam, ending the purchase of oil from Islamic states that use their oil wealth to fund terror, and carrying firearms and learning how to use them – arguing that in some recent terror attacks lives would have been saved if victims had been armed. One of his more interesting suggestions is for substantial, coordinated pressure against ‘apostasy’ laws in Islamic countries where people face death or imprisonment if they leave Islam. He quotes certain Muslim theologians as saying the religion would not have survived without the apostasy laws.

In conclusion – would I recommend that Christians view this documentary? Yes, it provides a vital, counter-cultural perspective that in Churchill’s dictum is required in order to “know the enemy”.

I would however caution, that you need to guard your heart, and not allow what your see and hear to bring you into hatred or fear. After watching What Would Muhammad Do? a good question to ask would be “What would Jesus do?”

And talking of different perspectives, here is one I came across recently that illustrates the importance of seeking to look at the events of our day through the eyes of Christ. Author and prophetic voice, Johnny Enlow, asks whether in reality (i.e. through prophetic eyes) Muslims are the next Nazi force to be feared and defended against, or if they are our next harvest field. He says the answer is the latter but fear will cause us to miss the kingdom advancement opportunity while love and courage connect us to it. He says that more Muslims have come to Christ since 9/11 than in the 1 400 year history of Islam and that many of these new converts are radical, bold and passionately reflect the love of Christ.

What Would Muhammad Do can be purchased online. View the trailer below: