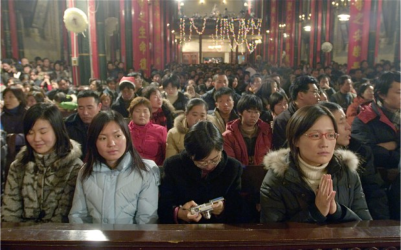 Originally published in the Gospel Herald

While European countries increasingly shy away from Christianity, Chinese citizens rapidly embrace the religion. In fact, China will soon be the most Christian nation in the world.

According to a study conducted by Purdue University professor Fenggang Yang, Christianity has spread so rapidly in China that by 2030 the country may hold more than 247 million Christians.

“It is going to be less than a generation. Not many people are prepared for this dramatic change,” Fenggang Yang, a leading expert on religion in China, told the Telegraph in an interview.

Although The People’s Republic of China is officially defined as an atheist country, Protestant churches have grown at an incredible rate. Prof Yang stated that Christian churches had just one million members in 1949 and grew to an astonishing 58 million in 2010-a stark contrast to a stagnant 40 million in Brazil and 36 million in South Africa.

China is home to one of the largest churches in the world; the 5 000 seat Liushi church, which holds twice as many members as Westminster Abbey. The R143-million building is one of the most tangible symbols of China’s release from Chairman Mao’s oppressive rule in 1976.

“Mao thought he could eliminate religion. He thought he had accomplished this,” Prof Yang said. “It’s ironic – they didn’t. They actually failed completely.”

Chinese pastors believe this spiritual growth is partly due to this former oppression.

“People are seeking the spiritual fulfillment and community that only comes from a relationship with Christ,” says Chinese pastor Jin Ahn. “We know persecution, we know what it means to not be able to worship our Lord in public. This makes us all the more excited to be able to commune with other believers.”

Although a clause in China’s 1982 constitution guarantees citizens the right to engage in “normal religious activities, many officials worry that the explosion of Christianity may harm its political future and negatively impact the Communist party’s grip on power. Protestant churches are closely monitored and preachers are watched to guarantee their sermons do not deviate from what the Party considers acceptable.

In an effort to avoid the Communist party’s prying eyes, many of China’s protestants worship at underground, unsanctioned “house churches”, which hold “secret” services in an attempt to evade the prying eyes of the Communist Party.

“They want the pastor to preach in a Communist way. They want to train people to practice in a Communist way,” said one underground church leader, who chose to remain anonymous.  He stated that state churches typically avoid subversive verses of the bible, such as the Old Testament book in which the exiled Daniel refuses to obey orders to worship the king rather than his own god. Such verses, the preacher noted, are seen as “very dangerous” by the government.

While some Chinese officials argue that religious groups can provide social services the government cannot and potentially assist in reversing a growing moral crisis in a country focused on economic growth, the overall attitude of the government towards the church is one of suspicion.

“They do not trust the church, but they have to tolerate or accept it because the growth is there,” said the church leader. “The number of Christians is growing – they cannot fight it. They do not want the 70 million Christians to be their enemy.”

However, he believes the church is likely to face an “intense” struggle in the near future as the Communist Party will attempt to halt Christianity’s rise.

“There are people in the government who are trying to control the church. I think they are making the last attempt to do that.”