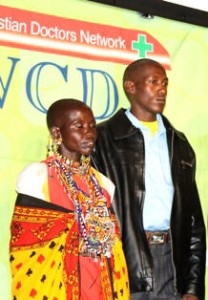 A Kenyan woman seriously injured when attacked by a buffalo was later healed by the power of God.

“We were called to Kanasa’s village in the evening before we were to leave and were told that a buffalo had attacked her when she went to collect water at the nearby stream,” says Ginny Hales, part of a missions team visiting from Birmingham, Alabama.

She said that Dr. Susan McCollum, also from Birmingham, Alabama, examined the woman and found her to be in a “very bad state” with her “femur fractured, a huge hole through the skin of the thigh where the horn of the buffalo had entered.”

“There was also damage to her forehead and some ribs were fractured. I believe a lung had been pierced…. The wounds were washed and covered and Susan gave pain relief medicine and antibiotics and as it was late in the evening and we needed to get all our things together at our base in Enturoto we had to say that we would collect her early the next morning and take her to the hospital. We prayed for God to keep her safe overnight and to heal here and then left.”

Hales said that early the next morning they returned to the village of Osarara and as they came to the bottom of the hill a woman came running towards them shouting, “Kanasa is healed! Kanasa is healed!”

“Behind her, walking down the hill without a limp or an impediment came Kanasa, on her face a huge smile! Her leg was truly healed and the hole where the horn had entered had closed completely. The broken skin on her forehead had also closed and there was no sign of infection anywhere,” Hales reports.

“As far as Susan could tell the ribs were still painful and it was a few weeks before they healed, but the major wounds had healed completely and there was no infection – a major miracle after being pierced by a dirty horn. There was great praise to God, as you can imagine.”

“This was indeed a miracle,” Kanasa’s son says. “We know my mother was restored by prayer because she had also broken her leg, and this was healed also.”