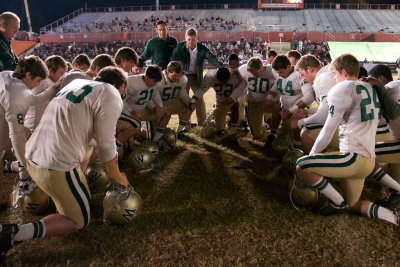 The film, from brothers Jon and Andrew Erwin, tells the true story of how faith and football helped unite a segregated Alabama community in the 1970s.

“Woodlawn” opened in the top 10 in ticket sales this weekend. It also earned a “100 percent fresh” rating from Rotten Tomatoes critics and a certified A+ Cinemascore rating. That’s the industry standard for measuring audience opinions.

Just over 60 films have received the A+ rating in Cinemascore’s more than 35-year history.

But even more importantly, the filmmakers have received reports of the movie’s spiritual impact.

The Erwin brothers tell CBN News they’ve received reports of more than 100 people making to decision to accept Christ after seeing the film.