Men Alive Network (MAN), a non-denominational men’s group that traces its inspiration back to the 2009 Mighty Men Conference, invites men in the Helderberg Basin to come and be revived and refocused at a two-day men’s conference in Somerset West on Friday June 24 and Saturday June 25.

High-powered speakers, Gary Kieswetter, Zane Meas and Rory Dyer, will lead the The Father Heart Revealed conference at The Refinery (New Generation Church) on Friday June 14 (6pm to 9pm) and Saturday June 15 (9am to 7pm). The registration fee, which includes meals and snacks, is R100. Men can register online and address inquiries to info@menalive.co.za.

Founder of MAN, Buks Kotzé, says that after making a personal recommitment to Jesus at the 2009 Mighty Men he told his pastor in Somerset West that there was a need to start a men’s ministry in the town because men who got inspired at conferences and other events needed a place where they could grow spiritually. 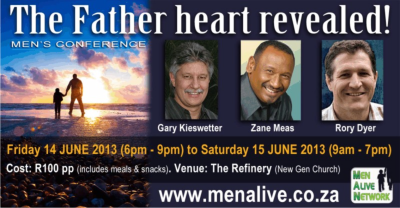 “He gave me a two thumbs up and his support. At that stage I knew nothing of spiritual covering but that is what I received there and without that this would not have come to where it is now,” says  Kotzé.

After much searching and meditation he came across a suitable curriculum, Quest for Authentic Manhood by Robert Lewis.

“It was practical and challenging. It also had minimum work to be done in order to present and facilitate. This was important because I hold a 9-to-5 job as mechanical engineer.”

A group of men from his church started meeting in 2010. Men from other churches, who also shared a hunger for God’s word joined them.

“It is absolutely stunning sowing in these men’s lives, without the shackles of religion, but addressing practical everyday issues men experience. It has grown to another meeting on Tuesday mornings and the other on Friday mornings, both at 5:30 am. It is equipping and fellowship meetings, for men about men and not just a pure Bible study group. The groups aren’t big; 10-20 men each morning,” says  Kotzé.

“Since the 2009 MMC, we’ve had groups going annually to the conferences – what a blessing in men’s lives! The guys then come back and get equipped and mostly they then move on but with a toolbox of tools to tackle life’s issues.

“Last year at the Karoo MMC, I trust I heard the Lord say that we need a men’s conference in the Helderberg Basin. My response was that I cannot do this on my own. And He sent five other men of similar spirit and heart for men to gather around me and we established Men Alive Network. The purpose of MAN is to reach out to men through conferences, camps and other events in order to inspire them and to strongly encourage them to join men’s groups or start groups in their churches. We are busy preparing a list of weekly Christian meetings happening in the Helderberg for men so that when they visit the website, they can choose a meeting place or contact us to help them start a group.

“This is still all very new and sometimes we feel this is too big for us, but through the Lord’s grace, power and guidance we take it step for step where He wants to take this.

“All the guys of MAN are in the marketplace as business owners or 9-5’ers but their hearts are on fire for making a difference in other men’s lives. This fire is because of the grace we have received and cannot keep to ourselves and also because of heartfelt thankfulness to our Lord Jesus Christ.”