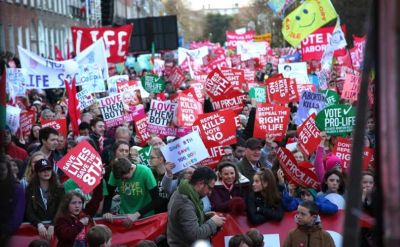 As many as 100 000 people attended a rally in Dublin to show their support to the continued right to life of the unborn in Ireland, organizers say.

According to the “Save the 8th” campaign, the March 10 All Ireland Rally for Life attracted the biggest crowd ever to express their wishes on the Irish abortion question. The Eighth Amendment to the Irish constitution guarantees the right-to-life of the unborn child. The pro-abortion Irish government will be holding a referendum in late May in the hope of abolishing the amendment.

Spokeswoman Niamh Uí Bhriain said, via a press release, that the government’s abortion proposal had woken a “sleeping giant” and the campaign to save Ireland from abortion now expected “a surge of volunteers” to work for a “No” vote in the referendum.

“These huge numbers are a rising of the people against the media and political elites and against the powerful international abortion industry who have poured millions into a campaign attacking our pro-life laws. Ireland is at a defining point in our history, and we are challenging the people to reject the abortion industry and to demand a better answer for mothers and babies,” she stated. “Abortion has no place in a compassionate and progressive society.”

The Rally for Life began in Dublin’s Parnell Square, where marchers from throughout the Irish Republic and Northern Ireland gathered before walking two kilometers along O’Connell Street to Merrion Square.

The crowds in Merrion Square welcomed a number of speakers including doctors, politicians, mothers and people with disabilities. Unborn babies diagnosed with disabilities will be particularly at risk if their constitutional rights are abolished.

Dr. Judy Ceannt, a medical doctor, told the Rally that the government wants to repeal the 8th so that they can make general practitioners provide abortion on demand for the first three months of an unborn baby’s life.

“They have not even consulted us doctors,” she said. “The basic law that governs our actions as doctors is first ‘do no harm.’ We are not meant to intentionally kill or harm any patient, least of all the most helpless, the unborn baby.  The government has no right to impose this on us.”

Another doctor, Maire Neasta Nic Gearailt, showed the crowd a €100 voucher for eyeglasses which she said would be sent to Senator Catherine Noone. Noone, the Irish government’s abortion committee chairwoman, had said she “could not find” any doctors who favored keeping the 8th amendment.

Charlie Fien, a Down syndrome activist also spoke to the Rally. Fien won worldwide fame in March 2017 when she testified to the UN on behalf of babies with Down syndrome, asserting that she was not a monster and begging that people like her not be eradicated from the world.

One mother testified to her feelings of anguish after having her baby aborted abroad. According to the UK’s Catholic Herald, Bernadette Goulding told the crowds gathering  in Parnell Square, “When I walked into that abortion facility that day, though I didn’t know it, my baby’s heart was beating under my own—my child was alive, and when I left, my baby’s heart was stopped, my baby was dead.”