This may come as a surprise to many of our readers: Christianity is growing faster in Iran than in any other country in the world.

The population there is overwhelmingly Muslim, yet tens of thousands are abandoning the faith.

On a recent Friday afternoon, some 600 miles east of Tehran, not too far from the Afghanistan-Turkmenistan border 20 Iranians were preparing to make a secret journey out of their country.

CBN News has concealed their identities and changed their names out of concern for their safety.

“I’ve been waiting for this moment for nearly nine years,” said Hediyeh.

The mission took months to prepare. It was fraught with danger.

“This was my wish before I die,” Fariborz told CBN News.

“The moment the Iranian government discovers someone has changed their religion, they will try everything to stop the person from sharing their new faith with others,” Afarin said. 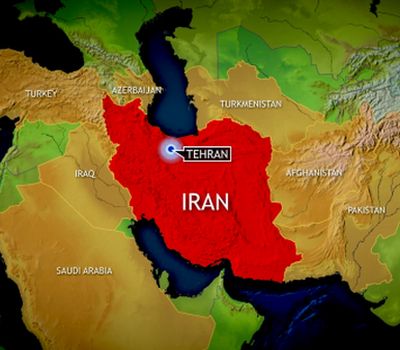 The price of converting
The 20 abandoned Islam for Christianity. Most paid a price for converting.

“The government scares Christians, imprisons them, fires them from their jobs, kicks them out of school, and many other tactics — all in an effort to stop them from evangelising.”

Afarin knew what they were about to experience could land them in trouble. CBN News met them shortly after they left Iran.

And this is why they left Iran for a few days.

All 20 got baptised for the first time!

“Inside Iran, if the government found out that you were baptised, you would be automatically imprisoned,” said Paul, an American who travels frequently to Iran.

“So rather than do that inside their country, they came outside,” he added.

Getting baptised
One-by-one the young and old got dunked.

Men, women and children … all of whom had renounced Mohammed … and made professions of faith in Jesus Christ made their way into a swimming pool rented for the occasion.

“I accepted Christ when I was 43-years-old,” Fariborz told CBN News. “There was no way for me to get baptised in Iran because of the dangers we face. Today, my faith is complete.”

“I became a Christian after seeing Jesus in a dream,” Bita recalled.

“As I was getting baptised this morning, I felt the Holy Spirit come upon me in a new way.”

“It feels very good,” said Majid, whose father, mother and sister took part in the celebrations.

“I’m very happy. My whole family is happy,” he exclaimed.

Elahe was a devout Muslim, but said the Koran left her with more questions than answers.

“This was the appointed time for me to get baptised,” Elahe said.

“I know God used the past 11 years to grow my faith so I could endure difficult times.”

Iranian experts like Mike Ansari say her testimony, and that of many others, points to evidence that God is advancing his kingdom in Iran.

“We have never seen such an unprecedented growth of an underground church anywhere else before.”

The impact of Mohabat TV
Ansari, an Iranian by birth, is director of operations at Mohabat TV.

The majority baptised on this weekend came to faith by watching Mohabat TV.

“Some of these believers waited for many, many years to be baptised,” Ansari told CBN News.

Ansari believes many Iranians, especially the young, feel disillusioned with Islam and are tuning-in to the channel in record numbers to learn more about Christianity.

“Roughly about 16 million Iranians within the last 12 months have viewed one or more of our programs on satellite TV, and also on their mobile device. That roughly translates to about 20% of Iran’s population, and that is an overwhelming number.”

“Since we didn’t know other believers or were part of a house church, there was nobody to help us grow in our faith. We could only grow through watching Mohabat TV and with the Holy Spirit’s help to get stronger in our faith,” Elahe said.

Nathan Rostampour led a house church in Iran for 10 years until he was forced to flee because of religious persecution.

Now he has a show on Mohabat TV teaching folks how to safely run a house church inside Iran.

“God is using this house church show to not only share the gospel, but to also equip the house churches and make leaders,” Rostampour told CBN News from an undisclosed location.

And those who track Christianity around the world say the one place where the faith is growing the most is in the Islamic Republic of Iran.

“We have been praying for years that Iranian people believe in Jesus and get baptised. Now, this dream is coming true.”

His brother, Haik Hovsepian, an Assemblies of God pastor, was murdered in Iran for his faith in 1994.

He says no matter how hard the government tries, it hasn’t been able to stop the spread of Christianity.

“The government is afraid of Christianity,” claimed Hovsepian. “They are very sacred of the Bible and they realise many Iranians are attracted to Christianity.”

“The government persecutes them, hoping to undo the effect, but the result is the opposite as more come to faith,” he added.

After a few days of fellowship, teaching and encouragement, the 20 believers returned to Iran, energised and committed to sharing the love of Christ with their countrymen.

“This was a special event, it was amazing,” exclaimed an ecstatic Hediyeh as she prepared to head home.

Equipped with resources
Each person got a new Bible in the Farsi language … along with Christian books, children’s videos and tiny microchips containing hundreds of discipleship and other evangelistic resources.

The group spent several minutes praying over the materials as they prepared to make the journey home.

Hovsepian urged Christians to remember Hediyeh, and the others Iranians, as they continue to preach the gospel inside Iran.

“Pray for those who are under persecution, that by God’s grace they will get stronger and find strength to tolerate these difficult days so that God’s work continues,” Hovesepian said.

Ansari says these exclusive images of Iranians getting baptised should encourage Christians that God is moving on the hearts of Iranians.

“There is a lot of good news that is coming out of Iran and we need to focus on that and celebrate that,” Ansari told CBN News.

“We hope that the results that are being shared with the church in the West would encourage the Body of Christ in the Western world that God is very much alive among Muslims and He’s doing a great job,” he added.