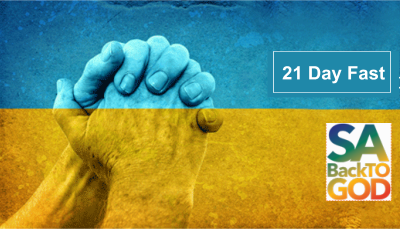 A campaign of 21 days of prayer and fasting for South Africa called by SABackToGod began today (January 14, 2015) and will continue until February 4.

In an introductory email SABackToGod says the call for the church “to fast for our nation, ushering in a new dispensation of rule and governance for SA” was issued by the ministry’s founder, Janet Brann Hollis, who is also the leader of Ruach Ministry, an established prophetic ministry. The call follows a prophetic word (See: https://gatewaynews.co.za/wp-content/uploads/2015/01/2015-a-Year-of-re-2.docx and http://www.ruachministries.co.za/prophetic-word-for-2015/) that Brann Hollis and her team received calling on South Africa to return to its Godly redemptive prophetic purpose to be a gateway for Africa and the world. SABackToGod was formed last year after Brann Hollis called a 21 day fast for the threatening situation at the strike-hit platinum mines at Marikana near Rustenburg.

The objectives of the current fast are for SA to turn back to God; for God’s will and purpose for the nation to be released; and for all to live in peace, prosperity and goodwill. According to the website, the plan is to reach the objectives by “engaging in strategic prayer and fasting in the Spirit realm” and “by removing all leadership that will not bow its knee to Jesus!”.

DAY 1
Prayer for our government, for the raising up of a government that honors God… For the removal of corrupt leadership, for

DAY 2
For the Church in our land…. For an awakening in the Spirit, for Revival in the church in SA! Praying for our Church leaders, of our own communities, and the place of worship we are submitted to.

DAY 3
For the law and order – through our JUSTICE SYSTEM, praying for those in government, praying against injustice in our land. The foundation of God’s throne is JUSTICE!!!!

DAY 4
Praying for New Laws, for protection against rape/sexual and domestic violence. Laws to be passed for harsher sentences’ for offenders.

DAY 5
Praying for our POLICE COMISSIONER, the removal of corrupt police. For a new standard of rulership in the police force!

DAY 6
Praying for our Mines. Praying against greed and misappropriation of wealth. Praying for living wages, and living conditions in our mines.

DAY 7
Praying for political parties – for the COALITION of Parties who represent our God. For a UNITY of purpose within these parties in S.A.

DAY 8
Praying for minimizing of effects of all STRIKES in our Nation. South Africa will not be CRIPPLED by strikes in 2015!

DAY 9
Praying for the breakdown of TRADE UNIONS that will not have honest and fair representation. Those that are corrupt, self-serving and do not represent their people and the good of this land, may they disband and continue no more. May their plans to bring anarchy and disorder to South Africa be brought to naught.

DAY 10
Praying for Education System: for Christianity to be restored, the God of the Bible to be taught in schools. The prohibition of SATANISM being allowed to be practiced in schools

DAY 11
Praying for the FAMILY: for the autonomy of the family to be preserved, for parents to have full leadership and rulership of the children. That the STATE will have no power to rule in the God given order of PARENTAL Leadership in the home.

DAY 12
Praying for Politicians, Church Leader’s/voices to emerge, so as to work together as one in strategizing for the future of the Nation.

DAY13
Praying for the preparation of our NEW PRESIDENT. A man of GOD, who
God has chosen for the future leadership of this nation!

DAY 14
Praying for the MEDIA, for the closure of media houses that will not report accurately, for those deliberately being used as agents of fear, and anarchy

DAY 15
Praying against all Political Parties/voices, citing violence, anarchy and racial hatred. Praying that their plans will be frustrated, their voices will be gagged and that confusion will reign in their leadership. Thereby they will gain no ground in their future plans and assignments, and SA will live in peace and stability.

DAY 16
Praying for the farmers, for the government and for the “Land distribution” movements. Praying that land be equally distributed to the rightful owner, and that this be done peacefully and strategically, benefiting the nation as a whole!

DAY 17
Praying against pestilence and crop failure for our Farmers, that S.A. would yield a bumper harvest in 2015!!! For peace and unity amongst farm workers.

DAY 18
Praying for ESKOM and state enterprises. For removal of corrupt leaders, for corruption to be exposed, for SUPERNATURAL COMPLETION of MEDUPI POWER station. For SAA, that corrupt dealings will be stopped immediately!!!

DAY 19
Praying for PARLIAMENT: Praying that our parliament would be defined by God himself! That parliamentary debate would be at such a high level in order for laws to be passed promoting this nation.

DAY 20
Praying for against Islam and the spreading of Islam and its values in our country. Praying for the doors & gates to Islam to be closed in this Nation.