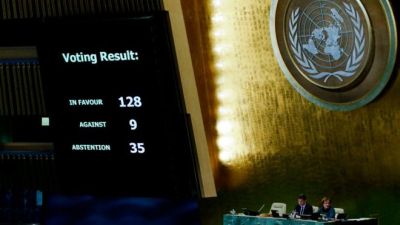 The ACDP  is disappointed by the United Nations General Assembly’s biased resolution passed on Wednesday, condeming Israel for defending itself against Hamas-led attacks from the Gaza strip, says ACDP MP and international relations spokesperson Cheryllyn Dudley.

She said the resolution condemning Israel for excessive violence against Palestinians in recent weeks, and calling on the UN Secretary-General António Guterres to submit a report within 60 days on his proposals for “ensuring the safety, protection and well-being” of Palestinian civilians was, in reality, a smokescreen for the violent extremist agenda of Hamas.

“The horrendous abuse of the civilian Palestinian population by Hamas is so obvious and yet not one word of condemnation of Hamas is included in the resolution despite attempts by the United States to add an amendment in this regard,” she says in a media statement.

“The resolution is totally one-sided and ignores the fact that Hamas terrorists relentlessly initiate the violence in Gaza and use civilian Palestinians as human shields. It is extremely concerning that the UN is being manipulated to support extremist agendas and terror activities,” she said.

This week’s resolution was proposed by Algeria and Turkey and was supported by 128 nations, with nine against and 35 abstaining.

Note: this report will be updated. Return later for more.