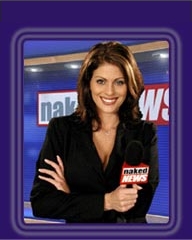 Family Policy Institute director Errol Naidoo has called on South African Christrians to take action to stop e.tv from continuing with its weekend broadcasting of the show Naked News in which female presenters read the news fully nude or strip as they present their news segments.

According to TV writer Thinus Ferreiera the broadcaster ended its showing of “soft core” pornographic films on Fridays and Saturdays a while ago, citing negative viewership feedback but is now returning to this genre with Naked News. e.tv publicity head Vasili Vass recently confirmed that the channel would broadcast the programme every Friday night/Saturday morning after the 10pm movie for 12 weeks.

“The free-to-air channel appears to be testing the South African viewers’ response to their flirtation with pornography,” says Naidoo, in an open letter to Chrisitians released today. He urges Christians to write to e.tv executives and “demand that the channel immediately cancel the broadcast of Naked News as well as all other pornographic programs that demean women”.

Naidoo dismissed a recent comment by Vass to a news reporter in which he said that the broadcast of Naked News had nothing to do with e-News because it was completely sponsor funded. “Despite Vass’s attempts to shift the blame, e-tv must take full responsibility for airing a programme that reinforces the destructive stereotype that women are mere sex objects,” he says.

Gateway News has emailed questions to Vass who said in a telephone interview that he would respond not later than Thursday. He confirmed that e.tv had received a number of protest emails as a result of Naidoo’s open letter. Asked how many emails he had received, he said:”Not even a hundred.” He said e.tv was formulating a response which would be sent to people who had sent them emails about Naked News.

Naidoo says that protest letters to e.tv should be sent to e-tv COO, Bronwyn Keene-Young at beverly.fasser@etv.co.za and MondeTwala, Group Head e-tv channel at mondet@etv.co.za and copied to vasili.vass@etv.co.za.

“If e-tv does not respond to our demands, you and I and every Christian citizen in South Africa must commit to a nationwide switch-off of e-tv and a targeted boycott of their sponsors. It is essential we make a bold and decisive stand today. There is much at stake. Pornography degrades and objectifies women and children and is a major contributor to divorce, family breakdown, the sexual exploitation of women and children, prostitution and general moral decay,” he says.

Meanwhile, in a newsletter dated April 30, Christians For Truth (CFT) have called on South Africans to take action to stop the distribution of the “sexually explicit and exploitative” Playboy magazine. It says Playboy has re-launched in South Africa and is now on shelves in CNA, Exclusive Books, and some 7-Elevens. “We are not yet sure whether they are being sold from Petrol Station shops or any grocery stores,” says the newsletter. “By 1996, through mobilizing grassroots action, Africa Christian Action and Christians for Truth had persuaded many advertisers to no longer support these anti-family publications and over 9 000 stores to no longer stock these anti-family magazines. Both Scope and Playboy were in such serious financial trouble that both went bankrupt and closed down. By God’s grace we can do it again!”

“Be alert! Please notify us if you see any Playboy magazines in your local grocery shop, Woolworths, Corner Cafe or Petrol Station shops,” says CFT which can be contacted at mail@cft.org.za.

The newsletter also requests people to write polite and rational letters to the Executive Marketing/Merchandise Manager of CNA, Exclusive Books and 7-Eleven, asking ask them not to stock Playboy magazines. “FHM and GQ are also explicit and are reportedly beginning to show more explicit material in order to compete with Playboy!” says the newsletter. It also calls on people to complain politely to the manager of any local shop which stocks offensive material, and to post polite complaints on the facebook pages of  Spar , Exclusive Books and 7-Eleven .

“Remember that when Woolworths announced that they were going to remove Christian magazines from their shelves, they received so many complaints on their Facebook page that within a few hours they reversed their decision! If this is not successful, a petition signed by local residents who shop there, can be given to the local shop manager.”