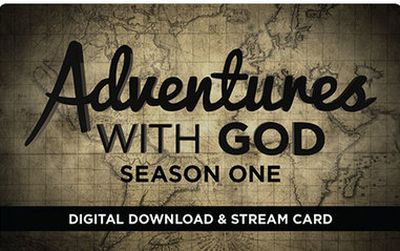 It has been almost two years since Darren Wilson and his production company, WP Films, has released a new DVD, but that changed on April 21, 2017, when his highly acclaimed new television show, Adventures With God, became available for purchase.

Adventures With God, Wilson’s first foray into television, is a logical next step for the filmmaker, who Devon Franklin, VP of Production for Columbia Pictures calls “one of the most innovative filmmakers and authors of faith today.”

“Most of what I see on Christian TV is kind of par for the course and not super innovative –it’s a lot of preaching, a lot of teaching, and not a lot of entertainment,” Wilson says.

“I wanted to make a show that not only dealt with big faith issues, but was also a lot of fun to watch.”

To do this, Wilson mixed his extensive archives with fresh, new adventures never seen by his audience before. As he explains the concept, “Each episode centers on a question, like what role does desperation play in God moving on your behalf, or why is faith so difficult? We then built the episode around that question, sometimes using adventures from my past films, and other times using brand new adventures that we’ve filmed recently.

“Everything moves at a brisk pace between adventure, behind-the-scene footage, and round table discussions, so you’re completely sucked into wrestling with this question in as entertaining a way as possible.”

As to why he made the jump into television, Wilson explains: “My movies are kind of episodic in nature anyway, with smaller adventures making up a massive whole, so breaking them down into smaller shows didn’t seem too daunting.”

The first season of Adventures With God is loaded with never-before-seen footage, including five of the 20 episodes being all new adventures Wilson was able to film during his epic two film journey making Holy Ghost and Holy Ghost Reborn. He was able to film so much for those films that some truly wonderful God moments simply couldn’t find their way into the narrative of the two films, but thankfully a 30 minute TV show provides a way to show them to the world.

To wrestle even more with the questions behind each episode, Wilson filmed intimate round table discussions with various evangelists, pastors, and celebrities, which help undergird each episode and give the adventures in the show new meaning.

“The idea for the round table was to have an honest, vulnerable discussion about some of the things most Christians struggle with. My only rule for every participant was that they had to leave their “ministry brand” at the door and be open and honest, even if that meant admitting that they don’t know or struggle with something. What we got from that is truly amazing.”

Indeed, the round tables proved to be so good, Darren is currently creating a spin off show called Questions With God, which Wilson says will allow the viewer to delve even deeper into the questions being raised in each episode.

“It’s similar to the Walking Dead/Talking Dead model, where you watch an episode, then immediately after that you go into a deep discussion of what you just saw. Put together, it should make for a very interesting hour of television.”

Adventures With God is currently broadcasting on a variety of Christian networks, including TBN, God TV, and Bethel.TV. Wilson has two full seasons planned for both Adventures with God and Questions With God, but is reluctant to commit to more after that.

“I love this new medium and exploring these adventures in this new way, but at the end of the day I’m a filmmaker, and I’ve go more movies to make, so we’ll see how my time pans out moving forward.”

You can purchase the entire first season of Adventures With God at www.wpfilm.com.