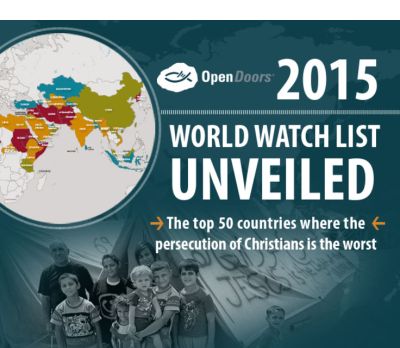 Even though violent Islamic jihadism in the Middle East dominated international news headlines throughout 2014, the creeping pressure of Islamisation in African countries stand out on the Open Doors World Watch List 2015 (WWL 2015). Over the past three years Open Doors has marked and tracked the increase in the persecution of Christian communities in a large number of African states. Sudan, Eritrea and Nigeria make their appearance in the Top 10 of the Open Doors WWL 2015. Kenya and Djibouti have marked the steepest climb on the list, and Tanzania and Eritrea also scored significantly higher compared to 2014.

Mexico, Turkey and Azerbaijan are entering the WWL 2015, with Morocco, Bahrain and Niger dropping out of the Top 50. The latter three countries, however, did not show an improvement for the situation for Christians.

North Korea remains the most horrific place for Christians for the 13th consecutive year
Since 2002, North Korea remains the world’s toughest state in which to practice Christianity. North Korea has gone through nationwide purges, in which over 10 000 people were banished, arrested, tortured and/or killed because of their alleged links with Kim Jong-Un’s uncle, Jan Song-Thaek. Campaigns against people who possess alleged illegal materials, like DVDs, CDs and books have been rampant. In the wake of the abduction and arrest of South Korean missionary Kim Jeong-Wook, dozens of people, presumably Christians, have been arrested and many tortured and murdered.

Top 10 countries on the WWL 2015
The Top 10 countries where Christians face the most pressure and violence in the reporting period of the WWL 2015 are, in order: North Korea, Somalia, Iraq, Syria, Afghanistan, Sudan, Iran, Pakistan, Eritrea and Nigeria. Saudi Arabia has dropped from the Top 10, even though the situation for Christians has not improved. This is also true for the Maldives and Yemen, which have both dropped from the Top 10. A complete list is available on the website www.opendoors.org.za.

Note: This interactive map does not include the Maldives, ranked No. 11, an archepelago about 400 kilometres southwest of India, in the Indian Ocean

Islamic State (IS) violence in Iraq (#3) and Syria (#4)
The violence of Islamic State (IS) in Iraq and Syria has dominated global news headlines. In Syria, Christians’ relative pre-civil war freedom, has virtually disappeared with the coming of violent Islamic jihadist groups, reaching an all-time low with the Islamic State caliphate. Already in February 2014, Christians in the city of Raqqa were forced to sign a dhimmi contract, violating their religious freedom.

Most Christians have fled IS controlled areas. As a result of the increased influence of jihadist groups, the society is radicalising, especially in areas controlled by jihadist groups. Of the 1.8 million pre-war Christian population, only 1.1 million has remained. This means that since the civil war began in 2011, 700 000 Christians have fled the country, of which 200 000 fled in 2014.

Since Islamic State proclaimed a caliphate in parts of Iraq, a stream of Christians as well as other minority groups have been forced to flee their homes. Many Christians have become internally displaced and have fled to the Kurdish region. Fear is growing that the whole Christian community has disappeared in areas such as Mosul and the Nineveh plain.
It has been reported that 140 000 Christians have fled from Mosul and the Nineveh plain to the Kurdish region or abroad. Those who stayed behind were forced to convert to Islam. The rising pressure and Islamic extremist violence account for Iraq’s continuing high position on the WWL.

Sudan’s (#6) new position in the Top 10
For the first time in over a decade, Sudan is ranked in the WWL Top 10 in the 6th position. The country’s score on the WWL has increased from 73 to 80 points. The increase is a result of a deteriorating position of Christians converts from a Muslim Background and faith-related violence against Christians living in the Nuba Mountains. Radical Islamic tendencies have been increasing.

The widely published story of Meriam Ibrahim is a clear example of the pressure on Christians, who are, by law, regarded as Muslim, when born into a Muslim family. Ibrahim was imprisoned on the charges of adultery and sentenced to death for allegedly committing apostasy from Islam, when she married a Christian man.

Eritrea (#9) re-entering the Top 10
Over the reporting period, the pressure on Christians in Eritrea has been increasing, in particular on non-traditional protestant Christian communities, Orthodox shifting towards non-traditional Protestant churches, and Believers from a Muslim Background. This pressure is mainly coming from President Isaias Afewerki and his ruling government. A local Open Doors source reported that the Eritrean government intensified its crackdown on Christians, leading to more than 138 arrests of Christians and church leaders.

Nigeria’s (#10) first Top 10 position
In the run-up to the 2015 elections in Nigeria, religious tensions have risen and scores of Christians are internally displace. While the world media’s attention was focussed on the Islamic State violence in Iraq and Syria and its caliphate, Boko Haram has proclaimed a similar, and possibly even more violent, caliphate in the city of Gwoza in northern Nigerian, which has spread to the whole Borno State and parts of Adamawa. Boko Haram is allegedly responsible for nearly 4 000 deaths in 2014, of which the majority involved Christians.

Kenya (#19) and Djibouti (#24) highest risers
The steep increase of Kenya and Djibouti, which in 2014 were ranked in the forties to being ranked into the Top 25 in 2015, highlights the intensification of persecution in African countries. Partly accounting for the rise of African countries, is the increase in faith-related violence.

The main cause, however is the creeping Islamisation, which increases the pressure Christians are experiencing.
Inspired by radical Islamic influences spilling over from Somalia, Muslim politicians, representing Muslim dominated constituencies in Kenya have an agenda to eliminate the Church in Kenya. The Djiboutian constitution has declared Islam as being the state religion and the government’s general attitude towards Christians and other non-Muslims is negative and attempts to control their activities.

Deteriorating situation in India (#21) and once ‘liberal’ Malaysia (#37)
With the election of Narendra Modi of the Hindu fundamentalist Bharatiy Janata Party (BJP) to the position of Prime Minister of India in May 2014, the atmosphere in India for Christians and other religious minorities has taken a turn for the worst. Weekly reports, report Christian meetings being interrupted and pastors and Christians being abused and assaulted. This resulted in India climbing to the number 21 position on the WWL 2015.

The government’s stance towards Christians and other religious minorities in Malaysia has hardened and pressure in the private, family and church spheres of life have increased. Faith-related violence has seen an increase over the past year.