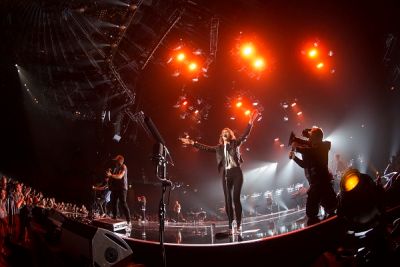 Hillsong United has sold more than 17 million albums, packed arenas around the world, and seen their songs skyrocket in popularity within churches, but one of their biggest fans is not even a Christian.

His name is Michael John Warren, a self-described agnostic who has directed documentaries about mainstream musicians Jay Z, Nicki Minaj and Drake — and who considers Hillsong United’s talents as good as or better than that on the Billboard Top 40.

Warren was so impressed with the Christian band and the church behind it that he agreed to direct a documentary, Hillsong: Let Hope Rise (PG), that follows the group’s incredible rise to popularity. The film opens in US theatres on Friday September 16 and is being released by Pure Flix, the same studio behind the God’s Not Dead series. It releases in South Africa on October 7.

An odd choice
At first glance, Warren may seem like an odd choice to direct a film about one of today’s most popular Christian bands – he hadn’t even heard of Hillsong when he initially was contacted about the possibility – but in hindsight he may have been the perfect fit.

“Ultimately it came down to the music,” Warren told the Christian Examiner. “I listened to [Hillsong’s song] Oceans, and as soon as the song was over I hit play again, and then I listened again. It’s obviously an incredible song. They’re very serious musicians.”

The music, though, isn’t the primary reason Warren walked away impressed with the band. Rather, it’s the way they conduct themselves off stage – their message, their joy, their humility.

“They’re sincerely loving and nice people, and they’re happy,” Warren said. “They’re happier at the root level than most people I know in life, actually.”

“Look, they want to be popular, they want to be recognised by non-religious press, and they want to win Grammys,” Warren said. “They want to do all of those normal things. And they don’t deny that. But what they have that a lot of other non-religious bands don’t have is this deeper sort of belief in what they’re doing. They’re not just trying to be at the top of the charts because of their own personal egos. What gives them the happiness is, one, believing in God. … And there’s this level that they’re serving God. If someone talks bad about them on Twitter, they don’t really care, because they know what they’re doing is bigger than any of the popstar stuff. I believe that they have a form of satisfaction that someone who is not making that type of music would be really hard to get”

“They aren’t just trying to sell albums. Hillsong’s mission is to use music to connect people to God,” he said. “I don’t necessarily believe what they believe, but I think that’s probably the coolest reason to be in music I’ve ever heard. And the music is really good.”

Warren said he has spoken “at length” to the band members about spiritual matters, although he said he remains agnostic. Nevertheless, after the film was completed, he decided to taken in a Hillsong United concert in Los Angeles so he could experience the music without the stress that filming a documentary brings.

“Whatever you see in the film is real, and in my opinion as director of the film a true reflection of what’s inside of them and what they’re trying to do. Their humility is very real. That’s who they are.” Warren said. “… I’m so happy to have made this movie. I really am. I’m very proud of it.”

Watch the trailer for Hillsong Let Hope Arise below: