[notice]Anglican theologian and author, Dave Doveton was part of the South African delegation at a recent international conference in London attended by Anglican leaders from 30 nations who are united in defending the true gospel. He says delegates left the conference with a fresh, global vision for carrying out the Great Commission.[/notice]

In 2008 the Global Anglican Future Conference (GAFCON) held in Jerusalem, established a Primates Council representing the majority of the world’s Anglicans and set up a global Fellowship of Confessing Anglicans (FCA) as a movement of bible believing Anglicans within the Communion. This was a response to the crisis caused by false teaching and the unbiblical actions of both the Episcopal Church in North America and the Canadian Anglican Church

“After some 450 years it is becoming clear that what some have called the ‘Anglican experiment’ is not ending in failure, but is on the verge of a new and truly global future in which the original vision of the Reformers can be realized as never before” — Archbishop Eliud Wabukala

The Primates Council called the London conference and it was held from Aril 23 to 27 at St Marks Church, Battersea Rise. It was attended by 200 invited delegates from 30 countries and 25 Anglican Provinces. We were a delegation of seven from Southern Africa:  From Port Elizabeth –Bishop Bethlehem Nopece, Rev Dave Doveton and Rev Dominic Dube;  from Durban — Rev Cierigh Samaai and Rev Nigel Juckes; from Stellenbosch — Father Gavin Mithchell; and from Namibia — Rev Lukas Katenda.

The theme of the conference “Jesus the Christ, Unique and Supreme” was brought home powerfully in the morning Bible studies from Colossians. The worship was joyful and uplifting. Seminars ranged over key topics such as evangelism, family, economic empowerment, the Gospel, church and spiritual leadership under pressure.

We heard reports from different parts of the world which put a face on the opposition and difficulties Anglican believers face as they try to engage in gospel witness. In Nigeria, Anglicans experience violent terrorism against leaders and churches; in many Islamic and Hindu contexts believers are persecuted and evangelism made very difficult. We heard how even in “Christian” England secular authorities harass faithful Christians. Many leaders spoke too of harassment by their own bishops for their gospel witness. While we were in the conference we received a report of a lay preacher from the very area we were meeting in who had been suspended for defending the traditional teaching on Christian Marriage. 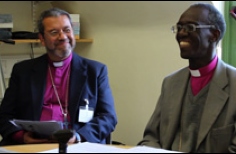 There was the most amazing sense of unity and purpose in the conference that struck me personally, as we recognized and reaffirmed together the nature of the unchanging Gospel – the life transforming message of salvation from sin and all its consequences through the death and resurrection of our Lord Jesus Christ. We were also encouraged to continue in our FCA goals which are – to proclaim and defend the gospel and to strengthen the church worldwide by supporting faithful Anglicans who have been excluded by those teaching a false gospel. We sensed that the Lord was working to revive and renew his church; were given hope that God still had a great purpose for our church by Archbishop Elihud Wabukala who in his chairman’s address to us said, “After some 450 years it is becoming clear that what some have called the ‘Anglican experiment’ is not ending in failure, but is on the verge of a new and truly global future in which the original vision of the Reformers can be realized as never before”

In a plenary address, Bishop Michael Nazir-Ali (UK) spoke powerfully and movingly; he said the FCA is called to model an alternative way for the churches of the Anglican Communion to gather and relate to one another in such a way as to carry out the Great Commission in the coming decades.

As we met in seminars and network groups we were able to take practical steps to implement the commission that we felt the Holy Spirit was urging upon us. One major outcome of the conference is that international networks have been formed to facilitate our mission and to resist revisionist intrusions. Some of the networks formed are – Episcopal leaders, Pastors, Evangelists, Women in ministry, Theological Educators, Cross-cultural workers, Aid and Development workers, and Lawyers.
For me personally, I am blessed to be able to attend international conferences fairly often, but this particular one was the experience of a lifetime.