Two months ago Cape Town missionary Juan Van Tonder said the Lord told him it was time for a new season of evangelism in Africa and it was to be all about the Kingdom of God. 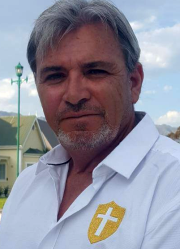 This month he and his wife Nikki took part in a 10-day evangelism campaign in southern Angola, together with local churches and a 6-member ministry team from Brazil. And Van Tonder said, while he had seen God in action in many countries over the years, he was in awe of what they experienced in Angola.

He said he had never seen so many people of all ages, at one time, being set free from demonic oppression, totally healed and filled with the Holy Spirit.

“Amazingly as He cleaned them He filled them with His Spirit,” said Van Tonder. “Sometimes as I touched someone or came near them, the demon left and they started speaking in heavenly languages and others near them started manifesting.”

He said the campaign, which was carried out in the towns of Santa Clara and Ondjiva, was supported by much prayer, with youth sometimes starting to pray at 4am. They did women’s ministry outreaches, visited homes and held evangelism services in churches, outdoors and in tents.

Initially churched people attended but as the Lord started moving — “as the Kingdom of light penetrated the darkness” — sick people heard about the meetings and came and the venues were filled to overflowing.

He was amazed to see many very young children delivered of demons, which reminded him of the reality of spiritual oppression being passed from generation to generation.

South Africa’s bush war in Angola during the apartheid era was also remembered, as spiritual breakthroughs came quite easily at the border town of Santa Clara near Oshikango in Namibia. But 43km to the north, at Ondjiva where South African troops had met stiff resistance, there was more resistance to ministry.

It was decided to pray into the resistance, and Angolan ministry team members repented for their nation’s actions during the war years and Van Tonder repented on behalf of South Africa. Thereafter the ministry was easier.

Rev Toni Ngula, who leads the Angola Presbyterian Church in Cunene province, and who had invited Van Tonder to be part of the ministry team, said it was a “great revival campaign”, ably organised by the Chosen Generation youth team.

About 2 000 people had attended, the Gospel was preached and a lot happened, he said.

Van Tonder said that after he sensed the Lord calling him into a new season of African evangelism, he had a vision in which he saw a huge golden sword in God’s hand. Then the Lord’s big hand pressed the sword deep into the centre of Africa which was black. Then there was an explosion and starting from where the sword went in, the whole continent became golden.

He said he was waiting on the Lord for the next African assignment. He can be contacted at juan.godwithus@gmail.com or 0716122556.