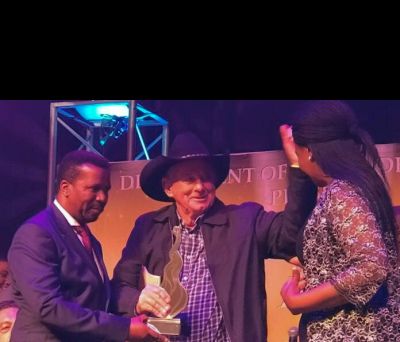 Angus Buchan was one of four “legends” honoured at the finals of the prestigious  Gauteng government-sponsored SA Men of the Year Awards at Carnival City Casino, Johannesburg on Wednesday night — and he was blown away by the love of Jesus he witnessed at the event.

“I have never heard a crowd at a secular event talk so openly about Jesus Christ — anywhere in the world,” the farmer evangelist enthused in an interview today, emphasising that he was privileged to travel to many parts of the globe.

“From the time we walked in to time we walked out at 12 people only spoke about one person – Jesus Christ,” said Buchan of the black tie event attended by several thousand people.

Buchan, together with poet and author Dr Don Mattera, cricket administrator Dr Ali Bacher and preacher Dr S D Gumbi were presented with legends awards acknowledging their impact as role models for men in an honours initiative which was launched by the Men’s Forum of the Gauteng Department of Social Development in 2015 as part of its campaign against gender-based violence.

Besides the honouring of legends, the event recognises men who make a positive difference in their communities.

Describing his experience of the event, Buchan said that after a formal banquet they went into the crowded auditorium where the master of ceremonies asked a pastor to open in prayer.

Altar call
“I thought ‘okay’, but then he went on to preach — with an altar call — giving people the opportunity to accept Jesus Christ as Lord and Saviour.”

He said the programme also featured dancing and singing — and the singer only sang Christian songs.

Then the MEC of Social Development Nandi Mayathula-Khoza got up and “gave glory to God”, and then the four legends awards recipients were each given two minutes to speak.

“The other three were all doctors — and for the first time in my life I was introduced as ‘Doctor’ — But I’m not a doctor, I’m ‘Uncle Angus’,” he chuckled.

Uncle Angus used the opportunity (View video clip below) to exhort men to be fathers and role models.

He said a standout feature of the night for him was the love and acceptance he received from everyone he met.

“Everyone who greeted me said they watched me [on TV] at home every morning. It was overwhelming,” he said.

“People were optimistic and excited for our country and the future,” he said.

Asked for his own sense of the state of the nation, he said there was a new transparency in the country with the affairs of Eskom and others being brought into the open.

“And I believe it’s  because of a million people that have prayed [at the It’s Time prayer day on April 22] that God would have His way. Everything has been exposed. There is nothing in the dark any more and its going to be very exciting to see the way forward.

“I’m very optimistic for our nation,” he said.

Buchan, whose recent engagements have included speaking at the first Mighty Crusade at De Deur, south of Johannesburg, speaking in parliament, and last night’s event, said he has been praying for years for a footprint to reach the masses in South Africa, and now it was happening.