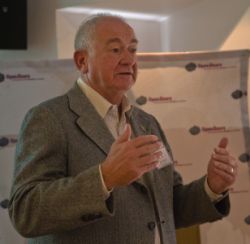 On April 27, we celebrated freedom in our country. The constitution partly defines this freedom as follows: “everyone has the right to freedom of conscience, religion, thought, belief and opinion”.

But do we really understand what this freedom means for us as Christians?

It means we are free to attend church, to worship God, free to pray with others, to tell others about His greatness, to preach, free to own and distribute Bibles and to proclaim out loud that we are believers in Jesus! We are truly privileged.

Compared to many other countries on the Open Doors World Watch List (WWL), South Africa’s religious freedom is the exception rather than the rule.

Religious persecution
In over 60 countries around the world, more than 215 million Christians experience heightened persecution because of their religion.

Many believers who convert to Christianity, from a tribal background or another religion, must flee to stay alive. Tens of thousands of believers from a Muslim background (BMBs), for example, face this dilemma every day.

In extreme cases, a Christian may simply decide that his or her best option is to stay and suffer the consequences. Even if it means death.

This seems unreal, but the Bible makes it clear that following Jesus and persecution goes hand in hand… In fact, everyone who wants to live a godly life in Christ Jesus will be persecuted. — 2 Timothy 3:12 (NIV).

Various degrees and forms of persecution
Persecution does not only mean death and violence but also any hostility experienced as a result of one’s identification with Christ. This can include hostile attitudes, words and actions towards Christians.

So whether you live in the most hostile country toward Jesus and His followers, North Korea, or in South Africa, where we enjoy much freedom to practise our faith, the body of Christ, across the world, is facing various degrees and forms of pressure.

You may even have felt, despite what the South African constitution says, that the culture around you is hostile to your Christian beliefs.

So, my question is, when millions of members of the body of Christ are suffering across the world, are we truly appreciating the freedom we have as Christians? And if you do — what are you doing with your freedom?

Allow me to highlight a few key things we can freely do as Christians in South Africa, which are almost impossible for other believers in places around the world.

Freedom to pray
In North Korea and Somalia — the two countries highest on the WWL — there is no freedom to pray.

The mere suspicion of being a Christian is reason enough for imprisonment or even execution.

In North Korea, a man was discovered to be a Christian and taken to prison straightaway. A friend said of him that when he came to faith, he made the decision that one day he would die for Christ. Every Christian in North Korea has made that choice.

In South Africa, we are free to pray to the Lord by ourselves, in a group, at church and over the radio. We can pray for others, for our country and for the persecuted body of Christ in countries around the world.

Freedom to own and read the bible
In some Muslim countries, like Iran, bibles are scarce and kept secret.

In such places Christians are in dire need of bibles. Having a bible helps them to stand firm in their faith.

In Iran, the need for bibles is so great that some people copy it by hand as believers are desperate to have a bible of their own.

Have you counted how many bibles you have in your home? We are privileged to freely read and own bibles and distribute bibles to other Christians in the country.

Freedom to worship and attend church
In many countries, where there are laws against Christian churches, believers gather at night, in caves, and whisper songs of worship together.

In some countries, you might be “free” to attend church but all is controlled by the government.

In China today, many Christians attend such state-organised churches. They have freedom to worship, but within limits. Many decisions — what may be published or preached, what can be taught at seminaries — are supervised by the authorities.

On Sundays in South Africa you have your pick of churches to attend, from different sizes and denominations.

In these churches we are free to attend services and praise the Lord with songs and instruments and at the top of our lungs.

We experience no interference from government or authorities.

Freedom of community and fellowship
In Afghanistan, all believers are secret converts from Islam.

Leaving Islam is seen as apostasy, and anyone suspected of converting to Christianity is arrested.

The result is that there is no visible Church — only God knows how many secret believers there are in Afghanistan.

In many persecuted countries, one cannot even share your new-found faith with your family — as even families persecute members when converting from Islam.

One of the most energising things for Christians is talking and sharing with our brothers and sisters in the faith.

By gathering in bible-study groups or sharing our burdens with our small group at church or our family at home, it gives us strength and hope for the week.

Let us not take our freedom of faith and religion for granted. Let’s appreciate and praise the Lord for it!

And may we continue to intercede for South Africa and be bold witnesses for Christ.

May we also not forget to use our freedom to pray, support, and love our brothers and sisters who share our faith, but not our freedom.

Open Doors serves millions of persecuted Christians in over 60 countries, including some of the most dangerous places in the world. Working always with local churches and partners, Open Doors supports persecuted Christians by raising prayer support, providing bibles, Christian materials, discipleship, livelihood skills – and in a whole host of other ways. It’s about strengthening the body of Christ so that the Church can truly be the Church — making disciples of all nations.