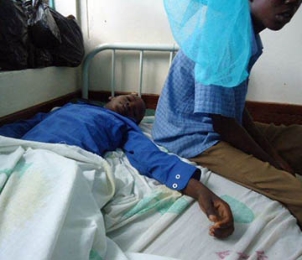 GARISSA, Kenya,  – Suspected Islamic extremists with Somalia’s al Shabaab militia threw a grenade into the home of the church guard of an East Africa Pentecostal Church (EAPC) congregation outside Garissa, Kenya on Saturday night (Nov. 5), killing an 8-year-old girl and another member of the church, sources said.

Three other people were seriously injured in the 8 pm grenade attack on the house, which is near the gate of the church compound.

Killed instantly were 8-year-old Winnie Mwenda Mutinda and 25-year-old church member John Kikavu. The child was the youngest daughter of church elder Patrick Mutinda, who also serves as the guard or watchman of the church building, sources said.

The other three people in the house at the time of the blast were seriously wounded. The watchman’s son, Samuel Mutinda, 12, suffered burns on his chest and leg, and his 10-year-old brother, Peter Mutinda, sustained burns on his hand and leg; the injuries of both boys required doctors to remove portions of skin. Burns on their grandmother, Rachael Kandu, also required the removal of skin from her leg, sources said.

The three wounded family members were first taken to the house of the church pastor within the compound before they were rushed to Garissa Provincial Hospital.

“The three injured Christians are in stable condition in the hospital undergoing treatment,” the pastor told Compass. “I hope they will be discharged soon.”

Al Shabaab activity near the Somali-Kenya border, including Garissa in northeast Kenya, has increased since Kenya began air strikes on al Shabaab-held territory in southern Somalia last month in retaliation for the rebel group’s kidnapping and murder of foreigners in Kenya. Even before Kenya’s military action, however, the Islamic extremist militia battling Somalia’s transitional government had threatened and attacked Christians in northeastern Kenya.

The church pastor, the Rev. Ibrahim Makunyi Kamwaro, told Compass he was witness to the explosion.

“I saw big blast coming out of the house, and immediately I rushed to the scene of the incident, and I heard the attackers saying, ‘You will have to stop taking of wine,’ as they fled away,” he said.

Islam forbids consumption of alcohol, but Makunyi Kamwaro said he was not sure what the comment meant.

“I think the church participation in the Holy Communion might have been taken to mean the church members taking wine,” he said. “This statement is quite unclear to me.”

Also on Saturday (Noveber 5), in the morning hours a bomb in Garissa near the Heller gas station and close to an electrical transformer was removed before it exploded. Police who received reports of white sparks at the site were able to remove and defuse the bomb.

Pastor Makunyi Kamwaro told Compass that, in spite of the al Shabaab activity in the area, he was not sure who was responsible for the deadly blast.

“At the moment we cannot say exactly who the attackers are, but what we know is that they are the enemies of the church,” he said.

Another area pastor said a fellowship of church leaders met on Thursday (Nov. 3) and wrote a letter to authorities requesting police security for churches in Garissa, especially on Saturdays and Sundays.

The pastor said that he received a threatening message yesterday on his cell phone, reading, “Message from al Shabaab – You must migrate [from] Garissa  town within 48 hours or you see bomb blast taking your life and we know your house, Christians will see war. Don’t take it so lightly. We are for your neck.”

In Garissa, police today also found three bombs before they could be detonated: one on a mini-bus, one near a gas station and one at a new house under construction.

In the attack on Saturday, in which one grenade missed its target before a second one hit, the parents of the children were not home; Patrick Mutinda was still in Garissa, about 1 kilometer from the EAPC building. His wife, known as “Mama Grace,” was helping the church pastor’s wife.

“Many of the church members have been with us here in the church building since the incident took place 10 hours ago,” he said yesterday, before Compass arrived at the scene today. “As I talk to you now over the phone, there are many people around or within the church compound: the church members, the police and people from the press. Thank you for keeping in touch with us and comforting us at this trying moment.”

Garissa is the provincial headquarters of Kenya’s North Eastern Province, which is predominantly Muslim.

Muslims restrict churches in Garissa in various ways. Christians are not allowed to conduct prayers, sing or use musical instruments in rented homes owned by Muslims. No teaching of Christian Religious Education in schools is allowed; only Islamic Religious Knowledge is taught.