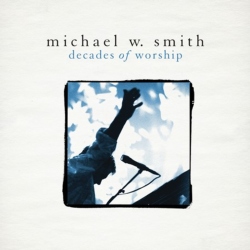 Michael W. Smith needs no introduction. ‘Decades of Worship’ is essentially what one would consider his ‘best of’ CD of his solo musical career.  His career started off with his Grammy nominated first album in 1983. Since then he has released 24 albums, won 3 Grammys and 44 Dove Awards and for all Michael W. Smith fans: he is not finished.  In a response to a question posed to Smith about retiring or settling down soon he says: “There’s a famous line in the movie Chariots of Fire where Eric Liddell says, “When I run, I feel His pleasure.” That’s the way I feel about creating and playing music.”

‘Decades of Worship’ contains 12 tracks.  Some of his most well known songs that he has sung like ‘Agnus Dei’ and  ‘Above Else’ can be found on this CD but included are also songs that Smith says some fans may not be familiar with as they come from outside projects too. The songs are taken off of the original albums of ‘Worship’, ‘Worship Again’, ‘A New Hallelujah’ and ‘Healing Rain’. If you don’t own any of those albums, this would be a good one to purchase.