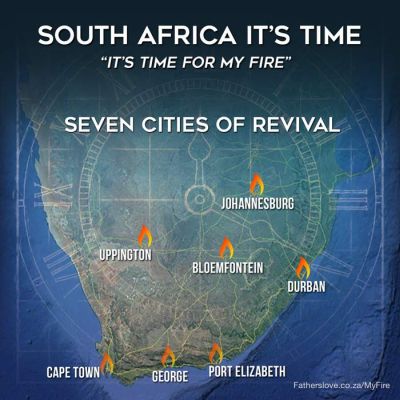 For 10 years a Johannesburg couple, Warren and Mirjam Horak, have been seeking the Lord and praying over a detailed prophetic blueprint that He gave Mirjam for a revival that would start in South Africa and spread through Africa, Israel and the world.

“Up until now we have not released these visions other than to a very few people, due to the importance and nature of these words,” say the couple in a message they have begun to share online, via social media and email.

Sensing that it was time to “come out from underground” as an important stage for preparing for revival has been reached, they began releasing key words from the blueprint and simultaneously called on “torch bearers” [believers who carry a torch for revival and are prepared to host and steward the coming revival] and intercessors [who are called to walk with the torch bearers] from seven “cities of revival” identified in the prophecy, to connect and gather with them.

The response to the call to gather together has been excellent and WhatsApp groups have been started for each of the revival cities [Cape Town, George, Port Elizabeth, Upington, Bloemfontein, Durban and Johannesburg.], said Warren in a telephonic interview yesterday.

“I’m getting emails and WhatsApps daily. It just doesn’t stop. So it’s coming together at a rapid rate. The Lord is doing something,” he said.

Warren said he had already been praying for revival for many years when Mirjam, who had recently arrived in SA from Holland, asked the Lord what her purpose was in the country, and He gave her the blueprint in a series of visions over several months.

“She didn’t even know South Africa or the map of South Africa and I was amazed at the strategic nature of what she was getting,” said Warren.

He said he had previously heard more general prophecies about a revival starting in the south and moving to the north, but he was astounded by the detail and the strategic keys to revival in Mirjam’s visions.

Warren and Mirjam were married in 2011 and have two sons, David, 5 and Daniel, 3. Warren is a businessman and founder of Fathers Heart International Ministries.

Warren said they were currently only permitted by the Lord to release extracts from the 57-page blueprint. What they were free to share amounted to about 12% of what God had given Miriam in the blueprint.

An overview of the published extracts can be viewed online here and anybody wanting to participate in and be kept up to date with the campaign to gather the torch bearers and intercessors from the seven cities of revival to seek revival, can do so by clicking on this link.

Warren said the vision of seven cities of revival did not mean other cities were excluded but that these were the cities that God was highlighting now. 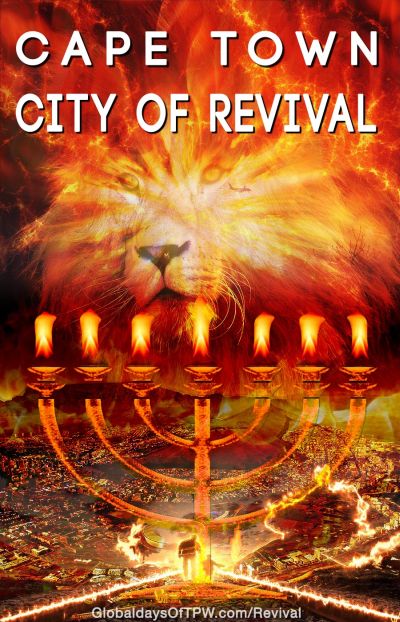 Some of the key parts of the blueprint that can be read in more detail online are:

The challenge now was to gather torch bearers — not to pray for revival but to host revival, said Warren yesterday.

The revival fires that were going to be released would be contagious and people would come without the need for any marketing or prominent speakers — Jesus would be the main speaker. It was going to be an indigenous revival that would spread to the world and it was necessary to prepare a new wineskin to host it.

Those participating in preparing for it would need to submit themselves and their ministries to the Lord and to one another, repent, learn from one another and allow the Holy Spirit to lead the way.

“Only when these vessels for revival start to come together, by the Spirit and lay it all down and seek the Lord as one, will we see revival fire break out in these seven cities!

“He will pour out glory over the meeting when the number is right — of people in one accord,” he said.