A monthly column in which Kwakanya Nazo shares stories, interviews and testimonies of people from all walks of life who are radical for Jesus and live to see change and transformation in and around them.

This month in Chosen Kwakes Corner we get to speak to upcoming writer, Busisiwe Sholo, a born again child of God. It’s always so refreshing to encounter people who allow God to use them in unique ways.

With just over a year in marriage, Busi; wife to gospel singer Vuyisani, shares with us about herself, her walk with God and about her soon-to-be-published project which she has allowed God to write through her.

Having asked her who she is, she responded to say: “I am a wife to an amazing husband and mother to a beautiful daughter. I am the first born of three children and I am the only girl. I am a township girl, born and bred in Durban’s UMlazi at M section. I did all my schooling there and only left for Cape Town after matric.”

To be young, married and mothering at such a young age, what does it mean to you?
Busisiwe: It is the most amazing thing in the world, a true blessing indeed. My own (late) parents were never married and I didn’t get to be raised by both my parents, but my father’s family. I occasionally visited my mother and I can say that it’s not a good thing to have your parents in different places. I am happy where I am now because I am partnering with God and my husband and we are raising our daughter together. I feel really proud knowing that just by being married we are already providing for our daughter an environment that I did not have. As for being young, I think God willing that will allow me to spend more time with my soul mate and children.

What is your greatest passion?
Busisiwe: Marriage and family. I want to see people doing marriage and parenting the way God intended them to be done. I once thought of studying psychology so that I could become a professional counsellor, but we will see about that.

What does GRACE mean to you?
Busisiwe: I always call it AMAZING grace because the grace of God is just that — amazing! Grace is the story of my entire life.

There is one incident, though, that really showed me the grace of God. My husband, daughter and I were involved in a car accident in April 2016 that left our car damaged beyond repair. When the car rolled my daughter fell out the window onto the grass on the side of the road. We came out with just minor scratches and that could only be God! A few weeks later we saw another accident where the cars we not badly damaged but the people involved had died, this made me more aware of how God had been gracious to us.

When did you come to know the Lord and what led you to Him?
Busisiwe: I did not grow up in a Christian home; in fact my grandparents were Catholic so I grew up in that background. I got born again in high school when I was doing grade 11. It happened during an event organised by the School Christian Organisation (SCO) which I had to attend by default, since I was head girl and it was the school’s policy for the head girl to attend all school events. Little did I know that God had a divine appointment with me. I accepted Him as Lord and Saviour and never looked back.

Let’s talk about your book, Marriage Uncovered that will soon be published. 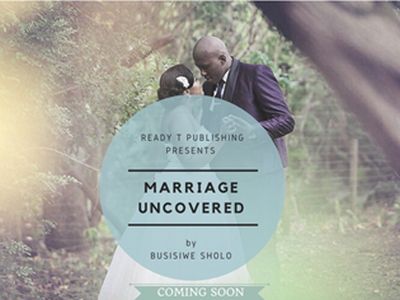 Why marriage? There are a number of things you could choose to write about. What inspired this very topic?
Busisiwe: I love love! I have always been one to stalk beautiful, Godly couples on social media. This book is merely a result of curiosity! Being a daughter of parents who were never married, seeing other people looking happily married and wanting to get married myself are what led to the birth of Marriage Uncovered.

As born again Christians, the Bible teaches us that we should do everything for the glory of God (1 Corinthians 10:31), I wrote this book so that I can share with others and in the process learn to do marriage God’s way because society today has made it very hard to understand God’s initial design for marriage.

In your own opinion, what sets this book apart from any other book you have read on marriage?
Busisiwe: Most books that I have read zoom in on one or two aspects of marriage but I come in on an angle that marriage is based on the relationship that Jesus has with His church and then look at so many different attributes of Jesus that are needed for our marriages to thrive (from sacrificial love, to keeping covenant, to learning to embrace our differences). After reading, the reader would have learnt how to be an imitator of Jesus Christ in his/her marriage and how to truly satisfy their spouse’s needs by simply taking up their biblical marital roles.

I know a number of people feel an urge/passion or desire to write but never get to it. What did it look like for you to start?
Busisiwe: I have been trying this book thing from 2013. Changing titles and approaches and did research but still did not put anything together then because I thought nobody would listen to anything about marriage that comes from a single lady. I believe getting married really did put me at ease.

Your favourite chapter in the book? (That which you thoroughly enjoyed writing)
Busisiwe: Just one? I love the whole book in its entirety but if you really want me to pick one it will have to be the one on the roles and needs of husbands and wives in marriage where I speak about how God designed our roles with our spouses needs in mind.

Briefly give us an overview of the book
Busisiwe: To uncover is to basically disclose and that is what I do in my book. So many people’s desire to be married is just inspired by wanting a “happily ever after” rather than being inspired by wanting to give themselves to and for someone. like Jesus Christ gave Himself for us. So in Marriage Uncovered I look at how marriage is a representation of the relationship that Christ has with His church and how at the very same time this relationship is a mirror for our marriages. I share on how we should pursue our spouses because Jesus Christ pursued us. I also took on deeper issues like how a loss of a child affects marriage and infidelity and forgiveness.

In general, what everyday life encouragement can you give to the readers of Gateway News?
Busisiwe: Laziness doesn’t pay but hard work does. No dream is invalid but hard work and prayer draw the line between dreams and reality. Faith without works is dead!