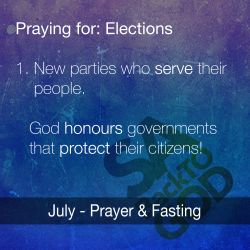 SA Back To God (SABTG) has set aside July as a month to fast for the local government elections on August 3, says Janet Bran Hollis founder of the prayer and fasting initiative and leader of Ruach Ministry.

In a statement calling on churches, intercessors and prophetic groups to join SABTG in a month of fasting and prayer, she says that God wants to bring in new local government in major centres and that the Church has the power and authority to counteract corruption and witchcraft that are opposed to God’s plans for the election and the nation.

SABTG will publish notifications on Facebook and Instagram  three times weekly with various prayer points for the July campaign, she says.

The full statement reads: “As a prophetic voice in SA, God has shown us clearly that He is wanting to bring in new local government in the major metros of SA. Why would God want to do this? Our present Government has been found wanting, just as Nebuchadnezzar was found wanting…. God has heard the cries of the poor, the disenfranchised, the hurting and bruised in this land. It is now TIME for a NEW SEASON, of government, starting with local government in these 2016 elections,” she says in a media statement.

“There is much corruption and witchcraft that is trying to hinder God’s plan for these elections and the future of our nation. The church has the power and authority to counteract this in the Spirit, by PRAYER and FASTING! SA back to God will be publishing notifications on FACEBOOK and INSTAGRAM, three times weekly, with the various prayer points. We are asking Church’s leaders and their congregations, intercessors, prophetic groups to join with us in this month of fasting.

“History dictates that GREAT Nations have been formed by massive prayer and fasting! The USA and Great Britain, are such examples, Kenya is another example of a nation that overcome bloodshed whilst gaining independence.

“May the body of Christ rise up in SA and worldwide and facilitate through prayer and fasting, a new season of governmental order in our nation.

“– Isaiah 58:6-8
Is not this the fast that I have chosen?
to loose the bands of wickedness,
to undo the heavy burdens,
and to let the oppressed go free,
and that ye break every yoke?
Is it not to deal thy bread to the hungry,
and that thou bring the poor that are cast out to thy house?
when thou seest the naked, that thou cover him;
and that thou hide not thyself from thine own flesh?
Then shall thy light break forth as the morning,
and thine health shall spring forth speedily:
and thy righteousness shall go before thee;
the glory of the Lord shall be thy reward”