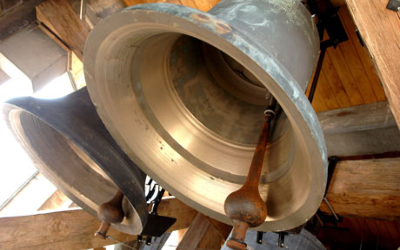 A Port Elizabeth attorney, Dr Ross Harker, is calling on churches throughout South Africa to join a church in Cape Town and a church in PE in ringing their bells at 12noon daily to rally Christians to pray for South Africa and the forthcoming elections.

“We need to mobilise to get God to bring about a miracle of the proportion that occurred in 1994 in this country when Nelson Mandela was elected as our State President,” said Harker.

He said it would be wonderful if other churches joined the two Anglican churches, St Margaret’s in Fish Hoek, Cape Town and St John’s in Walmer, PE, in the noontime bell ringing call to prayer.

Harker said his prayer burden began when his church cell group prayed “about the upcoming elections and the desperate state of crime etc. in the country”. He subsequently wrote a letter calling on recipients to assist in getting the country soaked in as much prayer as possible “to bombard Heaven with prayer calling on God for a Miracle in the elections in 2014 of enormous proportions that will bring about meaningful change in the country”. The letter was sent to his church cell leaders, to prayer networks, and to Anglican parishes throughout SA. It was also spread through social media.

“I have had very encouraging responses from different Anglican Parishes in different parts of the country,” he said.

Revd Canon Rodney Whiteman of St Margaret’s in Fish Hoek replied to Harker that his church felt a similar prayer burden and accordingly had begun to ring the church bell from Monday to Friday at 12 noon before praying for about 15 minutes for Africa and South Africa. His own church,St John’s, then agreed to ring their bell daily at noon to call people to pray for SA and the elections.

Harker can be contacted at the email address rossharker@telkomsa.net