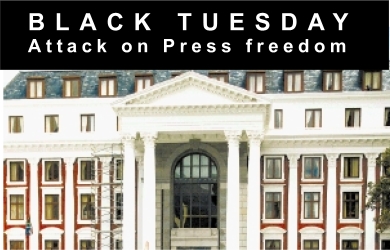 [notice]As the National Council of Provinces (NCOP) public hearings process for the controversial Protection of State Information Bill continued this week, with hearings in Parliament, ANTHEA JEFFEREY of the South African Institute of Race Relations (SAIRR) highlights (see below article) some sneaky Bill provisions that she says are not the constitutional safeguards they purport to be. Opposition politicians, the media and Christian spokesmen are among those who have warned that the Bill approved by the House of Assembly in November protects the corrupt. The Christian-based Justice Alliance of South Africa and others have called for the introduction of a public media defence to prevent the media, and other public watchdogs, from being intimidated into submission through the threat of harsh penalties for possessing or disclosing “classified” information. [/notice]
Canny amendments to the Protection of State Information Bill of 2011 (the Bill) might suffice to persuade a majority of Constitutional Court judges that the measure now passes constitutional muster, says the South African Institute of Race Relations. The amendments genuflect towards the Constitution’s guaranteed right ‘to receive or impart information’. However, they are likely to mean little in practice.

“The Bill’s supposed support for free speech is welcome – but is not to be taken at face value. There is too much devilry in the detail of the Bill’s provisions and in the disproportionate penalties it still lays down.”

The current Bill contains three key safeguards. First, it emphasises the importance of guaranteed rights to free speech and access to information. Second, it states that information may be classified only where ‘demonstrable harm’ to ‘national security’ would otherwise result, while national security is now quite narrowly defined. Third, the Bill is emphatic that classification ‘may not under any circumstances be used to conceal an unlawful act or omission’, cover up ‘incompetence or administrative error’, or ‘limit scrutiny
[to] avoid criticism’.

But three key problems also remain. First, hundreds of organs of state will still be able to acquire the power to classify, increasing the likelihood of chronic over-classification. Second, classification decisions will not be open to independent review. Third, the right to appeal against such decisions will be severely circumscribed.

In addition, the penalty clauses threaten journalists and other commentators with substantial periods of imprisonment not only for ‘communicating’ classified information but also for merely ‘possessing’ or ‘receiving’ it.

Says Dr Anthea Jeffery, Head of Special Research at the Institute: “The Bill also indicates that a person who ‘intentionally accesses…any classified information without…permission to do so’ is punishable by a prison term of up to ten years without the option of a fine. This penalty is as severe as that for intentionally hacking into a state computer.

“This clause suggests that any journalist, academic, MP, or other person who opens and reads an e-mail attachment that happens to contain classified information could immediately be vulnerable to imprisonment, merely for having perused it without knowing it be classified.”

Where information has been illegally classified for an ulterior purpose, the State may find it difficult to apply these penalty provisions. Classification decisions made to conceal incompetence or corruption are not only illegal but also invalid, as they lie beyond the classification powers conferred by the Bill. This means the material in question has never been lawfully classified at all and that people cannot be punished under the Bill for obtaining or communicating it.

In practice, however, journalists and other commentators will need considerable courage to obtain or communicate classified information, irrespective of how obvious the illegality and invalidity of the classification decision might seem. Few will want to run the risk of arrest and prosecution, even if they know they are likely to be vindicated in the end. Media companies, political parties, and civil society organisations
will also need deep pockets to fund defences against such prosecutions and may soon fight shy of dealing with classified information at all.

Adds Jeffery: “The Bill’s supposed support for free speech is welcome – but is not to be taken at face value. There is too much devilry in the detail of the Bill’s provisions and in the disproportionate penalties it still lays down.

“The Government claims there is no need to introduce a ‘public interest’ defence for journalists, but analysis of the Bill shows clearly why such a provision is essential to protect the Media and many other commentators.

“The Government also says there is no precedent for such a public interest defence in the laws of other
countries. This is not true, for such defences are included in Canadian, Danish, and German law and are
endorsed by the United Nations and the Council of Europe.”