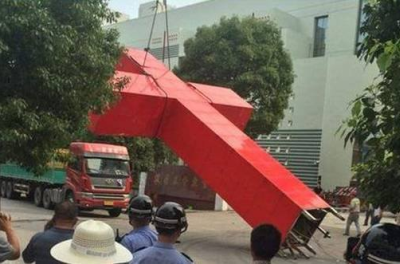 China Aid reports that five church leaders have been detailed over the religious meetings and activities. They are accused of leading a cult and using their organization “to undermine law enforcement.” The five leaders were identified as Shen and Li Jianghua from Taiwan, 71st Street Church’s pastor Li Jia’en, a Shanxi pastor, Ms Li Jiangtao, and a Henan pastor, Liang Jing.

“According to the facts of your violations, the characteristics, circumstances, and degree to which they harm society and other related truths, your law-violating actions are severe,” their penalty notice reads.

Pastor Li Jia’en shared to China Aid that they have been ordered to stop all their religious activities. They can no longer hold meetings even though they must still continue to pay rent on its building. Nearby shops were told to report to the authorities if meetings are observed in the future.

Activists believe that China is cracking down on Christians in the country because of the growth in their numbers. Up to 1 700 churches have since been destroyed. Crosses in Zhejiang province have also been removed. Activists believe that these anti-Christian measures would expand to other Chinese provinces soon.

Since June, Chinese authorities have been pursuing cults, following the severe beating of a woman to death in a McDonald’s store in Shandong, China. The woman was beaten by a group of members of Church of Almighty God, an illegal cult in China, who believed she was possessed by an evil spirit. Two of these members who carried out the crime were executed. The rest were given sentences ranging from seven years to life. A total of 19 followers of the Church of Almighty God in July have been imprisoned, UCANews reported. However, there were already more than 1 000 arrests made of the Church of Almighty God members.

Apart from Christians, Xinhua News Agency reported that leaders of other religious faiths have also been prosecuted. Back in June, the spiritual leader of a Chinese Buddist sect was prosecuted for both financial and sexual offenses. The Chinese Communist Party rationalized their crackdown of cults, claiming they can cause social instability. A new law was even submitted to its parliament, which detailed harsher punishments for those caught involved in cult organizations and carrying out “superstitious activities.”