Welcome to Chosen Generation Ministries (with Edward C Anyibuofu as founder and senior pastor, preacher and a teacher of the unadulterated word of God) which came into full manifestation on July 30 2011 and has subsequently grown extensively into a fully fledged church.  This ministry is reaching out to the whole of South Africa and beyond with signs and wonders and miracles. With an excellent and anointed worship team, a lively youth ministry, a resource Centre where DVDs and CDs are available, a radio station, as well as a looking toward a television channel, the ministry is producing healthy, growing Christians.

To present to the body of Christ and the world, through the media of television and any other electronic media available, the Kingdom, the Power and the Glory of God.

We live in a day and age where Christians are double minded in their beliefs. Because of “winds of doctrines the church world is confused and not reaching its full potential. “A double-minded man is unstable in all his ways, The Word of God declares that the Truth shall set us free. The Word of God is power in itself, when it is rightly preached or taught and is explained by the Word and not by man’s theories, imaginations, world news reports and events. God is fully in control and He has given us a manual to direct our lives. The time is now here to conform to the Word, His plan and His standards. The people of God should be the most blessed, the most prosperous and healthy people in all the earth, for they are the ambassadors of the ALMIGHTY GOD, CREATOR of all that exists. Our mission is to help Christians understand the Word and grow up into mature Sons of God, not keeping them busy with religious belief and demons, but teaching them how to rule and reign in this life in one Christ Jesus, right here and now. also to reach the unsaved by giving them true hope, encouragement and a way of reconciliation with God Almighty through His Son, Jesus Christ. Through the cells group meetings, media of television, and any other electronic media available, The Chosen Generation Ministries will fulfil this mission by recogniSing, sourcing, creating and packaging anointed and truthful material from men and women of God from around the globe, and presenting it in a spirit of excellence. The Chosen Generation will pursue every possible avenue to spread this material to every corner of the earth. 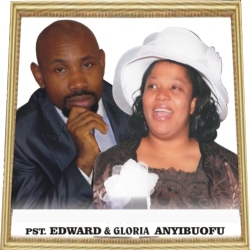 Pastor Edward Chukwudi Anyibuofu, together with his wife Gloria, has been in full-time ministry since 2008. Pastor Edward and Gloria are the senior pastors and sole founders of Chosen Generation Ministries international which came to manifestation on Thursday 30th July 2011. Chosen Generation Ministries is situated in Port Elizabeth in the Eastern Cape Province of South Africa and is well renowned for word, worship and wonders, miracles have always been evident in their ministry, Testimonies of cancers and HIV being healed are documented often. People from all over South Africa and other international destinations travel far distances to the Miracle Meetings held on Tuesdays, Thursdays, and Sundays. Edward Chukwudi Anyibouofu is a New Testament preacher, bringing word of the Light and fresh Glory of God into the Church of Jesus Christ. He is an anointed man of God, who is renowned, appreciated as he reveals present day truths and expounds the Word of God. People sit for hours at a time in the meetings as he accurately quotes scripture after scripture whilst teaching the Word of God with revelation knowledge, which is seldom seen or heard in this day and age.

Pastor Edward has a vision of owning a daily television broadcasts to reach people in many nations. His vision is to see the church coming into maturity and perfection as the revealed and manifested Sons of God. His passion is to see the Kingdom, the Power and the Glory of God fill all the earth, of which much of that has already been seen, heard and experienced, in every meeting held by Pastor Edward, Jesus Christ is really showing up… and when asked to comment on it he just smiles and says, “It’s His Grace, so it’s His Glory.

Pastor Edward, a man called by God to bring men to their rightful position in Christ through the gospel of grace, mercy and peace, as many have been Christians for years yet still leave their lives in struggles not being able to put the devil where he belongs, he is highly anointed and gifted in dividing the word of truth and God confirming that with healing, deliverance and prophecy.

Pastor Edward is married to Gloria I Anyibuofu and they are blessed with three lovely kids, two girls and a boy, Edward junior, Miracle and Glory.

Pastor Edward C Anyibuofu has a passion for youth and is doing everything possible by the grace of God to create impact in the life of youth of today with the gospel of grace. He has succeeded in setting up home cells in various locations in order to build a close relationship with the youth.

Pastor Edward encourages as many that are willing to be a part of this great move of God in any form to join him in depopulating hell and birthing sons into the kingdom.