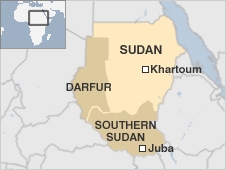 Sudanese National Security Intelligence and Security Service agents have arrested a Christian woman in a Darfur camp for displaced people, accusing her of converting Muslims to Christianity, said sources who fear she is being tortured, Compass News Direct reported yesterday.

At the same time, in Khartoum a Christian mother of a 2-month-old baby is wounded and destitute because she and her husband left Islam for Christianity.

In Darfur Region in northwestern Sudan, Hawa Abdalla Muhammad Saleh was arrested on May 9 in the Abu Shouk camp for Internally Displaced Persons in Al-Fashir, capital of North Darfur state, sources said.

Abdalla has yet to be officially charged, but authorities have accused her of possessing and distributing Bibles to others in the camp, including children. Sources said she could also be tried for apostasy, which carries the death sentence in Sudan.

Abdalla has been transferred to an unknown location in Khartoum, sources said, adding that they fear she could be tortured as she was detained and tortured for six days in 2009. Intelligence agents, they said, have been monitoring her movements for some time.

“There is no guarantee of her safety,” said one source in Darfur.

The US Department of State’s International Religious Freedom Report 2010 notes that while Sudan’s Interim National Constitution provides for freedom of religion throughout the country, it establishes sharia (Islamic law) as a source of legislation in the north.

The arrest comes as northern Christians become more vulnerable to official and societal pressure with South Sudan set to split from the predominantly Muslim north on July 9. Adding to tensions was the north’s weekend military attack on Abyei Town, located in a disputed, oil-rich region to which both South Sudan and the north lay claim.

Knife attacks
In Khartoum, the Christian couple with the newborn said they have come under attack for converting from Islam to Christianity.

Omar Hassan and Amouna Ahamdi, both 27, said they fled Nyala, 120 kilometers (75 miles) southwest of El-Fashir, for Khartoum in June 2010, but knife-wielding, masked assailants on May 4 attacked the couple after relatives learned that they had converted from Islam to Christianity. Hassan told Compass that he and his wife were renting a house from her uncle in Khartoum, but he ordered them to leave after learning they had left Islam.

His wife was injured trying to protect him during the May 4 attack, he told Compass.

“I have been in Khartoum for six months, with no job to support my sick wife,” Hassan said. “Muslims invaded our house and, in an attempt to kill me, they knifed my wife in the hand.”

The knife pierced the palm of Ahamdi, who said her brother had stabbed her three times in the stomach nine months ago, seriously injuring her spleen, after she told him she had become a Christian.

“I feel pain, but my husband is alive, and we are praying that we get money for treatment for both my hand and the spleen,” she said.

In the violent outburst, her brother also broke her left leg. She was rushed to a local hospital, where personnel were reluctant to treat her because of her conversion, sources told Compass. Ultimately she was hospitalized in Nyala Teaching Hospital for three weeks – where she met Hassan, a recent convert who had also suffered for his faith who visited her after hearing how her family hurt her.

He said he found no one caring for her even though she was in agony. He called an Episcopal Church of Sudan (ECS) pastor to help her, and she was discharged after partial recovery – to the hostile home where she had been attacked.

“You don’t deserve to be a member of my family,” her angry father shouted at her, she said.

Her family locked her in a room, shackled to a wooden chair, and severely beat her for a month.

“I was badly mistreated – they shaved all my hair and my father whipped my head,” Ahamdi said. “But neighbors used to sneak in secretly and provided me food and water.”

After freeing her from the chair, they restricted her movement to the property, she said.

“I found a chance to escape to the ECS church, where I got married to Hassan,” she said. “My health continued deteriorating, and the doctors recommended that I be transferred to Khartoum for specialized treatment for my ailing spleen. With a small amount of money, we managed to reach Khartoum by train, where my uncle hosted us not knowing that we were Christians.”

In Khartoum, they were unable to afford the medicine prescribed for her spleen.

“There is only one pharmaceutical shop in Khartoum that deals with spleen-related problems,” Ahamdi said. “The shop has to order the drug from Cairo after making a deposit amounting to US$300 before the drug is ordered. But we are not able to raise the needed amount since we are jobless.”

Hassan and Ahamdi depend on friends to provide them occasional food, she said. They sometimes go without eating for two days, she said.

“We cannot deny Christ – this is a big challenge to us, because we do not have a place to go,” she said, through tears. “We have no food, and we are jobless. I am still in pain, besides having a 2-month-old baby boy to care for.”

Path of faith
Born in Shendi, north of Khartoum, Hassan was raised in Nyala, son of an imam belonging to the Ansar Al-Sunna, a sect of Sunni Muslims. He said he started questioning the Quran while accompanying his father on a preaching mission in Omdarfu, an area bordering Darfur and the Central African Republic.

A high-profile Muslim from Europe happened to be in the area, and young Hassan asked him questions about Muhammad and Jesus, he said. He found no immediate answers.

The following day, the European Muslim told his father that Hassan should be warned that soon he could become an infidel or kafir. Hassan denied it when his father summoned him, but the family grew uneasy with him and took his job away. He said he felt he was wasting his time in spreading Islam, and people began suspecting that he had converted to Christianity even though he had not yet done so.

He said he decided to be without faith, and his father denied him all basic needs. After obtaining work as a security guard with a Non-Governmental Organization (NGO), he began comparing Christianity and Islam with his workmate. His friend invited him to visit a church, and Hassan also began attending a Bible study.

Hassan said he began having dreams and visions and heard a voice saying, “This is the way.” He told this to church pastor, who told him it referred to Jesus saying it of Himself in John 14:6.

“A desire for attending church grew in me, and thereafter I got baptized,” Hassan said. “The pastor encouraged me to keep on praying. One morning, when I was on my knees praying, my father entered into the room and found me.”

Furious, his father called out to him, but Hassan did not reply.

“He then hit me with a big stick on the back of my neck,” he said. “He closed the door, invited seven relatives plus my elder brother, who started beating me with sticks and broke my shoulder. I almost lost my sight. My elder brother helped me escape to the pastor’s house, where I was hospitalized for 13 days.”

After recovering, he returned to the pastor’s house, where he continued working with the NGO on a temporary basis. Early in 2007, he said, he met his uncle in the market, who tricked him into returning home, where his father beat him. His mother helped him escape, and a Christian from South Sudan took him to a hospital.

His pastor sent him to Khartoum, but he ended up working for another NGO in Juba, where he joined the ECS church. With his faith strengthened, he returned to Nyala when the contract ended in 2007. When he reached home, his father realized that he remained a Christian and ordered him to leave and never return.

They soon fled persecution to Khartoum, where their trials have continued.

“We have been given notice to vacate the house,” Hassan said. “Life is becoming unbearable for us here in Khartoum.”