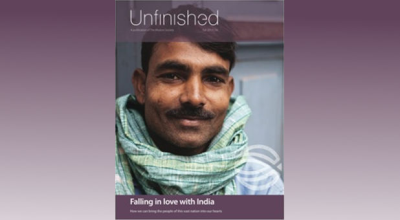 Christianity in India is growing at a rapid rate among middle- and high-caste Indians and young people, according to Unfinished magazine, which examines social, economic and cultural trends in the “new India.”

The current “remarkable receptivity to Christ” across the entire spectrum of Indian society, which had been traditionally among only lower castes and marginalized communities, is one of five dominant themes identified by Indian anthropologist Prabhu Singh that define today’s India and its missional challenges.

“With more than 71 million claiming Christianity, India is now the eighth largest Christian nation in the world,” says Dick McClain, president and CEO of the Mission Society, publisher of Unfinished. “Yet with 456 languages and more than 2,611 distinct people groups, India still has more people groups unreached with the gospel than any other nation—88 percent of its population.”

Considered the most ethnically diverse country on the planet, the “new India” is experiencing rapid change, diversity and complexity. According to Singh’s identification of the five top trends, with great receptivity to Christianity also comes alarming religious animosity, resulting in persecution and violent resistance to Christianity. With greater “glocal” (both global and local) complex connectivity comes both new economic opportunities and widening economic disparity between the newly wealthy and members of the lowest castes who cannot rise above their status.

Multiple articles in “Falling in Love With India,” the latest issue of Unfinished, offer insights on how these trends in the emerging “new India” require changes in missiology. “Glocal” complex connectivity has led to focus on urban missions, a shift from solely rural and tribal, the growing middle class and youth.

India’s Christian history has come full circle from colonialism, in which the West jumped in to “help India’s poor,” to the “new India” that sends out thousands of its own missionaries and is home to hundreds of self-supporting ministries. “Give Us Friends,” in the fall issue, encourages American Christians to re-examine their relationship with brothers and sisters around the world as equals in God’s kingdom work and to share in partnership.

The issue also examines how to pray for the “new India,” how to sense God’s call to serve in India, “20 Things That Might Surprise You about India” and statistical trends, including demographics on religion, hunger and suicide, and the rise of social media.