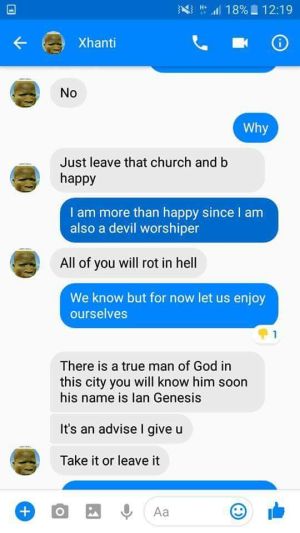 South African social media has been rife with attacks by various men of God against one another, as well as with believers accusing one another of being devil worshipers — apparently to promote certain leaders by discrediting others,

Many believers know that discernment comes by studying God’s word. They should therefore make scripture — and not derogatory social media posts — their final authority on whether leaders are true men of God or not.

Those who rely on social media for “discernment” will get caught up in destructive arguments and attacks on men who are called to spread the gospel and win souls for the Lord.

But if bible-reading believers realise, while reading such posts, that they have been following false teachers, their spiritual discernment will help them to swallow their pride and break away from the deception.

To all the genuine senior pastors under attack my advice is that as fathers, they are the defenders who must personally stop every predator who tries to attack their homes. An attack on them is an attack on their loved ones. Whether the attacker is spirit, man, or beast — to gain entrance it must face the awesome, Christ-based power and authority of the man of God at the gate.

In life there are no guarantees that an adversary will not come. Sometimes, despite all that we do, challenging situations arise, and it is foolish not to make it as difficult as possible for a thief to break in. The most effective strategy is to pray without ceasing!

Men of God opposed by spiritual forces in high places, should come to the battle with unstoppable force and unbeatable weapons. They need to stand guard over their families with prayer, and be seen by their children –ministering through prayer.

Through prayer God often gives direction and instruction to help people protect their loved ones from all kinds of attacks. He did it for Noah, Job, Joseph and Mary, and He will do it for Christian leaders who are unjustly attacked.

Men of God pray — and let the world not see your competition jealousy and disagreements. We still need to bring more souls to the Lord.