[notice]A monthly column by Michael Cassidy, evangelist, author, Christian leader and founder of African Enterprise whose ministry in Africa and the world has spanned more than 50 years.[/notice] 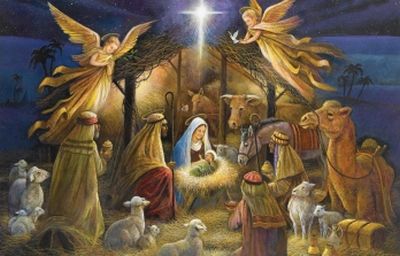 Have you ever tried to read music? If you have, you will know that it is one thing to read either the lower, bass line of notes or chords or just the upper treble line, but it is quite another thing to read both lower and upper lines at once. But to get the full melody, it is most important to do so.

Let’s look at it like this. The lower clef is the human, earthly events around Christmas. The upper clef tells of God’s plans, designs and purpose in the Incarnation of His only Son.

Thus the lower clef is an over-packed little town to which crowds of ordinary human beings are streaming to take part in a census required by the local political authorities. The result is overcrowded accommodation, inflated prices and the consequent complications for a young pregnant maiden and her naturally anxious husband.

Then comes the stable, called to serve as a substitute maternity facility where the ordinary drama of human birth is witnessed by a few quizzical animals and a gentle peasant carpenter.

Then comes the sudden need to flee for safety because a jealous political tyrant – a bloke called Herod – gets all threatened by a word he gets about some rival king being born in one of his towns.

All this is so very human – so very familiar – so very ordinary. A government census. Some crowded hotels. A pregnant girl. A normal delivery. A political tyrant. A few new refugees.

And, after all, how can a mother and child in a stable and later in exile have any particular bearing on anything? I mean, on anything important.

Heavenly
But in the upper line, there is melody. That’s where the theme is. That’s where angels are singing “Glory to God in the Highest and on earth peace, goodwill towards men.” That’s where Heaven knows that in Bethlehem’s Babe lies the fulfilment of God’s great promises to reach out in redemptive love to Planet Earth.

Ah, yes! Here lies the key to making melody of life and getting harmony and meaning into human existence – we must read both lines of music. We must read the whole score. We must let both lower and upper lines come together.

When that happens, we find that they harmonise. We find that the kind of God we have is one who can reach down to human beings because we need saving. We also find that man is no mere accidental mechanism but a creature made in the image of God who not only needs saving, but is worth saving.

In fact even in every day, normal life throughout the year we need to be living as the great amphibians between Nature and Super-Nature. We relate to both realms at once. We are on Earth, but daily we pray “Our Father who art in Heaven.” We add when praying, “Thy will be done on Earth as it is in Heaven.” Earth and Heaven here again. Then in John 17:1 in Jesus’ Great Prayer, He stands in Palestine on Earth, and “lifts His eyes to Heaven, and says Father…”

Truly fulfilled living requires us to live as Jesus did, both downstairs and upstairs. In this we are reading both Upper and Lower tiers of music.

This Christmas life around you will no doubt seem very normal and ordinary. And maybe a manger in a distant time won’t strike any responsive chord in your heart. But read the upper line, read it in any Gospel, hear it in any church on Christmas Day, and the full glory of God’s music for the world and for you will flood your soul.