Construction has begun on the site of the giant ‘Cross of Hope’ that is being erected opposite the Van Stadens River Bridge near Port Elizabeth.

A 3m steel pedestal that will support the visionary, 5-storey high (14m) steel cross has been deeply embedded in a foundation of 12 tons of concrete, ensuring that the completed structure will stand firm in the face of wind gusts of up to 200 km per hour.

And off-site the first 6m section of steel has been welded in a Jeffreys Bay workshop and sent off for galvanising. 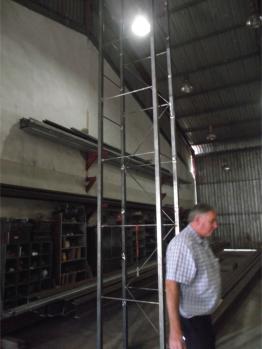 Project founder and coordinator Robbie Hift said that while recently reflecting on the detailed instructions that God gave Moses for the construction of the tabernacle (Exodus 25) it struck him that “in the same way, God, the Waymaker, wants us to use the very best of materials, to use the highest standard of workmanship to create a cross that will last for our children’s’ children’s children!”

Upon completion, the cross, with the message ‘Jesus Loves You’ spelled out in 4m high letters at its base, is intended to encourage all people who use the bridge that God loves them and offers hope in every situation, he said.

Vision from God
In December Hift had a vision from God to build the cross opposite the bridge which is known for suicide jumps. After he started to share the vision in obedience to God’s prompting, local businesses and individuals began to catch the vision and have contributed the land, the materials and the technical expertise for the ambitious construction project. Recently the need for R100 000 worth of steel seemed like an impossible hurdle but God made a way through an engineering works and local steel suppliers, providing all of the steel within seven days of breakthrough.

Not only had the Lord provided all the known material needs for the project but he had provided help that “one never even dreamed of”, said Hift. For instance a Karoo farmer caught the vision and offered to provide electric fencing and solar batteries and a constant link to a security company to safeguard the installation. And a Port Elizabeth lawyer phoned up and said he was so excited about the project that he wanted to offer free legal services should the project ever run into legal problems.

Media attention
Hift said a number of newspapers and radio stations have picked up on the miraculous story and he has received emails from well-wishers from all over South Africa and Namibia. Acknowledging that a few people have been critical of the project he said he realised you can’t please everyone.

“If we are successful in giving just one person the hope, the encouragement and the fresh vision so that he changes his mind to choose life instead of death, then the whole project will have been worthwhile,” said Hift.

He said he was urging people to stop referring to Van Stadens bridge as the “Suicide Bridge” and rather to talk of the “Cross of Hope” and the “Bridge of Hope”.

He said people are welcome to contact him with their “valuable ideas, suggestions, contributions, and most important: their prayers! The whole vision was built on the prayers of fervent men and women! “

Hift can be contacted at info@ecmirror.co.za. He also invited people to view news updates on the cross at his newspaper website ecmirror.co.za.

Expanding on the technical aspects of the giant cross, he said that after galvanising, the separate 6m sections of the steel framework will be bolted together, cross-braced and cladded all round with 5mm white perspex. LED lights will be fitted inside the cross which will be hollow so that a workman can climb up inside to perform maintenance work.

The completed cross will be winched upright with the help of a 4×4 vehicle and thick steel cables, obviating the need for a crane and facilitating easy future maintenance. All lighting and electric fencing will be powered by a sophisticated solar technology.