[notice]A monthly Christian sport column by Cobus Kruger, a professional triathlete who is passionate about evangelism, leadership and community development through sport.[/notice]

At the start of the Commonwealth Games, I watched the first medal race for South Africa, the triathlon event for women and men. It was great and special as I knew the South African competitors on a personal level as my competitors in the ITU racing events that I race. Henri Schoeman started the race so well. I knew before the race that he was the strongest swimmer in that field, so it was interesting to see that he was not swimming in front as he normally does. Then it came; he hit the swim speed hard in the second lap and got himself in a breakaway through transition with the Brownlee brothers from England and a competitor from Scotland. I was so excited for Henri. I knew that the Brownlee brothers would hit the bike speed hard because they knew that Richard Murray, our other South African, can run well, and he needed to stay in that second pack of cyclists that was about one minute behind them. Then it happened; early in the bike Henri crashed, forcing him to stop for a while. As a result the Brownlee brothers got away from him and he was man alone. And soon all his hard work and plans were gone when the second bunch of cyclists caught up with him…

The thought came to me: how many times do we make plans and strategies to get ourselves into a position to succeed in the goal and vision that the Lord has given to us. Everything starts well, and then a simple thing like a crash takes us out of the race. All our preparations, all our plans did not work. We sometimes even doubt our vision in these times. The fact is that our vision from the Lord should not be determined by our results and performance in our race in life, because the results and performance should always be in God’s hands. 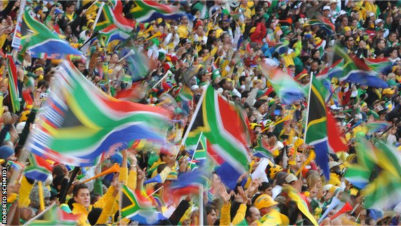 Joseph kept going
Think about it. Joseph had a dream and vision from God. If he had allowed the results and circumstances in his first 20 plus years of his life to determine his vision, then he most probably would not have seen the fulfilment of the dream and vision that he got as a 17 year old boy. His “crashes’ in life included: his brothers throwing him into a pit, being sold as a slave, being falsely accused and thrown into prison for two years. However, through it all he kept his vision and dream strong by serving the Lord his God with all he had, and the Lord used these circumstances to realise the vision and dream that he had as a 17 year old boy. Yes, we should prepare the best we can, because whatever we do we should indeed do it to the Glory of God! (Read 1 Cor 10:31) but we still should not force the result out of our own strength, timing and understanding. One of the scriptures that comes to mind is where Paul writes the following in 1 Cor 3 verse 6-7: “I planted the seed, Apollos watered it, but God has been making it grow. 7 So neither the one who plants nor the one who waters is anything, but only God, who makes things grow.”

In faith
Even when things go wrong we should still pursue the vision the Lord has given us — in faith. Remember, we should not operate and make choices in the conditions that arise around us, we should make our choices as God said in faith. What is faith? “Now faith is confidence in what we hope for and assurance about what we do not see.” (Heb 11v 1).

So let’s keep the confidence in the “crashes’ in our life, and assurance in God’s vision and plans even though we don’t always see them succeeding immediately. Remember, we cannot please God without this faith in action in our lives. (Read Heb 11v6)

Richard Murray got a bronze medal with a fast run off the bike in the Commonwealth triathlon race, and Henri Schoeman, came 15th in that race. Two days after this triathlon race, South Africa had a mixed triathlon relay with Kate Roberts, Gillian Sanders, Henri Schoeman and Richard Murray, and they had a great race, and got silver for South Africa. Our Sevens Rugby team got their first gold in a Commonwealth Games after they beat the New Zealand team in the finals. Our bowling teams got gold in both the ladies’ and men’s divisions. Our golden swimmers, Chad le Clos,Cameron Van der Berg and other new talents from South Africa performed well with a lot of medals in the pool.

When we go to the athletics, we see that a few of our athletes have made it to the next rounds and finals that will take place before and around the time you read this news. outh African 400m hurdles champion Cornel Fredericks lay down the marker in his specialist event as the fastest qualifier for the finals with a time of 49.26 seconds. Sprinters Ncincilili Titi, Akani Simbine and Wayde van Niekerk will line-up in the 200m semi-final.

Wayde van Niekerk, who broke the 15-year-old national record at the Diamond League meeting in New York in June clocking a time of 44.38 seconds, will run in the 400m finals. Victor Hogan, South African discus thrower, South Africa’s long jump duo of Zarck Visser and Rushwahl Samaai and Commonwealth javelin champion Sunette Viljoen, also progressed to the finals. South African men’s 800m athlete, Andre Olivier featured in the semi-final after he finished first in his heat the day before, in a time of one minute, 47.93 seconds.

We are proud of all these athletes, Let’s remember this month that we should not let the “crashes” in our lives take us away from the calling, vision and dream that the Lord has placed into our lives. We may not see the results today or next week, but let’s stay confident in faith. It is like being good at running. If you get the right coach, and get the right planning together to improve your running, then you will start to train extremely hard, but the result of the plan and consistent hard work will only been seen after at least nine months. In this nine months you should trust your coach and programme even if you don’t see immediate results. How much more can we then trust our God who is the way, truth and life in the vision and calling and dreams that He gave us. Don’t let the “crashes” in life take you away from your vision. God is faithful!!!!!

Click here for more info on how Cobus and the next generation in fitness training system MPG can help you to achieve your fitness goals in running, swimming, cycling, duathlon, triathlon, or aquathletics.